The Latter Times & the Judgment of Nations

The Judgment of Nations - I

The Latter Times & the Judgment of Nations​
Margaret C. Galitzin

Recently I came across a small book titled The Latter Times [Los Ultimos Tiempos] by a Spanish Doctor of Sacred Scripture, Fr. Benjamin Sanchez, born in 1905. (1) This short work, which examines public and private prophecies about the Latter Times, is quite interesting and significant for our days. This is particularly so because many Catholics, overwhelmed by the apostasy and sin of our days, are wrongly thinking that we are in the End Times that will immediately precede the Last Judgment.

Based on Scripture and prophecies that agree with it, Fr. Sanchez correctly situates our disastrous days in History. The results of his study confirm the prophecies of Fatima and Quito, as well as those of the great Marian prophet St. Louis Marie Grignion de Montfort, which speak of a great chastisement to be followed by a long period of peace, the Reign of Christ through Mary, or, more briefly said, the Reign of Mary spoken of by another prophet of our times, Prof. Plinio Corrêa de Oliveira. 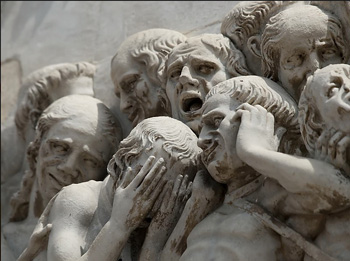 Detail of the Last Judgment – Cathedral of Orvieto​

In general, the Scriptures and private prophecies that Fr. Sanchez sets out warn us of a great chastisement that will come over all humanity – a Judgment of Nations – to be followed by a long period of peace and universal well-being. When he uses the expression Latter Times, he emphasizes that it does not refer to the end of the world created by God. In the great universal catastrophe that is coming, the world will not be completely annihilated.

Rather, the remnant of mankind that survives the chastisement will be changed and purified. With a zeal for the glory of Our Lord and Our Lady, they will build a better world. Many of the prophecies speak of a great leader, a man sent by God, a prophetic figure beloved by Our Lady, an Eliatic figure, who will lead this restoration.

In the era that will follow, Fr. Sanchez notes, “Christ will reign from one end of the world to the other, and all His enemies will fall at his feet (1 Cor 15:25) to render Him their vassalage. His Church will be gloriously triumphant throughout the earth. (2)

The End Times or Final Judgment, will take place only after that period of God’s triumph on earth. The great chastisement and purification of the world should notbe confused with the Final Judgment, Fr. Sanchez emphasizes, for Scriptures tells us that not even the Angels of Heaven know the day or the time of the latter.

What is announced in Scripture and prophecies, which will be presented in this series of articles, is not the end of the world, but rather what he calls the Judgment of Nations that will take place during a Great Chastisement that will come upon a world that has lost the faith and grievously transgressed all the laws of God. It is a Chastisement that will take place in our times foretold by Scriptures and more clearly described in various approved prophecies.

Let us begin this series with a look at just several of the quotes from Scripture (3) that confirm a Chastisement or Judgment of Nations, to be followed by a time when a purified remnant will fear and glorify the Lord.

Isaiah prophesizes a Latter Times when the earth, profaned by its inhabitants, will be devastated and only a few of the faithful will remain: 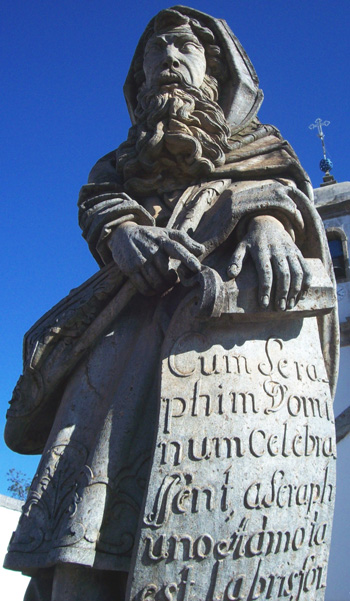 “With desolation shall the earth be laid waste, and it shall be utterly spoiled: for the Lord hath spoken this word. The earth mourned, and faded away, and is weakened: the world faded away, the height of the people of the earth is weakened. And the earth is infected by the inhabitants thereof: because they have transgressed the laws, they have changed the ordinance, they have broken the everlasting covenant.

“Therefore shall a curse devour the earth, and the inhabitants thereof shall sin: and therefore they that dwell therein shall be mad, and few men shall be left.” (24:1-6)

The small number of survivors of this great chastisement is foretold in the imagery of the few olives that still cling to the tree after it has been shaken:

What is important to note is that some inhabitants, albeit few, will remain after the Great Chastisement, which is a definitive sign that it is not the end of the world.

The Judgment of Nations

The Day of the Lord announced in Sophonias will be the Judgment of the Nations, where each will receive just punishment and the remaining faithful will be led by a “chosen (pure) lip” so that all might serve and give glory to the Lord: 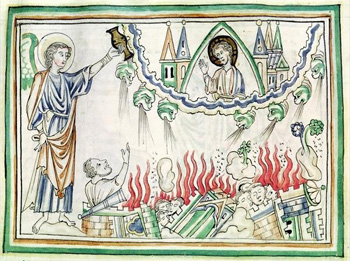 The destruction of Babylon, above, became the archetype of all divine chastisements​
“The great day of the Lord is … near and exceeding swift … That day is a day of wrath, a day of tribulation and distress, a day of calamity and misery, a day of darkness and obscurity, a day of clouds and whirlwinds … And I will distress men, and they shall walk like blind men, because they have sinned against the Lord: and their blood shall be poured out as earth, and their bodies as dung. …

“For my judgment is to assemble the Gentiles, and to gather the Kingdoms: and to pour upon them my indignation, all my fierce anger: for with the fire of my jealousy shall all the earth be devoured. Because then I will restore to the people a chosen lip, that all may call upon the name of the Lord, and may serve Him with one shoulder.” (1: 14-17, 3: 8-9)

A renewed world, not the latter times

A Great Chastisement will come over the earth, Zacharias foresees, where only a third part will be left. These, however, will be tried and purified and will call on the name of the Lord:

“And there shall be in all the earth, saith the Lord, two parts in it shall be scattered and shall perish: but the third part shall be left therein.

“And I will bring the third part through the fire, and will refine them as silver is refined: and I will try them as gold is tried. They shall call on my name, and I will hear them. I will say: Thou art my people: and they shall say: The Lord is my God.” (13:8-9)

This should suffice to demonstrate that the universal Judgment of Nation, which will be something all will see and experience, is not the Final Judgment, which will be at the end of the world.