The idolatry of Vatican II : Viganò,


THE IDOLATRY OF VATICAN II: Francis and the War on Tradition​ 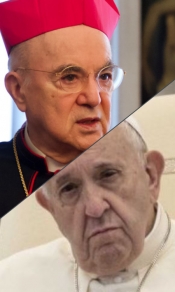 Similes illis fiant qui faciunt ea,
et omnes qui confidunt in eis.
Their makers will come to be like them,
and so will all who trust in them.
- Ps 113:16

While nations that were once Catholic introduce laws that promote abortion and euthanasia, gender theory and sodomitical “marriages;” while in the United States a legitimately elected President is seen to be usurped in the White House by a corrupt, depraved, and pro-abortion “President” placed in power by a gigantic fraud to the sycophantic applause of Bergoglio and progressive bishops; while the world population is held hostage by plotters and conspirators who profit from the psycho-pandemic and the imposition of ineffective and dangerous pseudo-vaccines, the solicitude of Francis is focused on catechesis, in a monologue staged on January 30 for the selected audience of the National Catechetical Office of the Italian Bishops’ Conference [CEI]. The show was presented on the occasion of the 60th anniversary of the Catechetical Office, “an indispensable instrument for catechetical renewal after the Second Vatican Council.”

In this monologue, written in all probability by some grey functionary of the CEI in an outline form and then developed off the cuff thanks to the improvisation in which the august orator excels, all the words that are dear to the followers of the conciliar church are used: first and foremost the word “kerygma” that every good modernist can never omit in his homilies, despite the fact he is almost always ignorant of the meaning of the Greek term, which with all probability he does not even know how to decline without stumbling on accents and endings. Obviously the ignorance of those who repeat the refrain of Vatican II is the instrumentum regni ever since the Clergy were forced to set aside Catholic doctrine in order to privilege the creative approach of the new way. Certainly, using the word announcement instead of kerygma would trivialize the speeches of the initiates, and also reveal the contemptuous intolerance of this elite caste towards the majority who stubbornly cling to the forbidden post-Tridentine notionism.

​
It is no coincidence that the Innovators detest with all their strength the Catechism of Saint Pius X, which in the brevity and clarity of its questions and answers does not leave any margins for the catechist’s creativity. The catechist should be – but for sixty years no longer has been – the one who transmits that which he has received, not an elusive “personal recollection” of salvation history that from time to time chooses which truths to transmit and which ones to leave aside in order not to offend his listeners.

In the merciful Bergoglian church, the heir of the post-conciliar church (which are both variants of a spirit that no longer has anything Catholic about it), it is licit to discuss, contest, and reject any dogma, any truth of the Faith, any magisterial document, and any papal pronunciation prior to 1958. Since, according to the words of Francis, one can be “brothers and sisters of everyone, independently of faith.” Any believer can clearly understand the very grave implications of the present pseudo-magisterium, which brazenly contradicts the constant teaching of Sacred Scripture, the Divine Tradition, and the apostolic Magisterium. However, the naive victim of decades of conciliar reprogramming of Catholics could believe that, in this composite babel of heretics, protesters, and those given over to vice, there remains at least some space for those who are orthodox, devoted subjects of the Roman Pontiff, and virtuous.

All brothers, independently of faith? This principle of tolerant and indistinct acceptance knows no limits... except for actually being Catholic. In fact, we read in the monologue given by Bergoglio in the Sala Clementina on January 30:

May the reader have the goodness not to dwell on the uncertain prose of Our orator, who in his “off the cuff” improvisation combines doctrinal chaos with the slaughter of syntax. The message of the speech to Catechists precipitates the merciful words of Fratelli Tutti into contradiction, forcing a necessary change of the title of the “encyclical” letter to: “All Brothers, with the exception of Catholics.” And if it is very true and acceptable that the Councils of the Catholic Church are part of the Magisterium, the same cannot be said for the only “council” of the new church, which – as I have stated many times – constitutes the most colossal deception that was ever carried out by the Shepherds of the Lord’s flock; a deception – repetita juvant – which occurred in the moment in which a clique of conspiring experts decided to use the instruments of ecclesiastical governance – authority, magisterial acts, papal discourses, documents of the Congregations, texts of the Liturgy – with a purpose opposed to that which the Divine Founder established when he instituted the Holy Church. In so doing, the subjects were forced to adhere to a new religion, ever more blatantly anti-Catholic and ultimately antichristic, usurping the sacred Authority of the old, despised and deprecated
pre-conciliar religion.

.​
We therefore find ourselves in the grotesque situation of hearing the denial of the Most Holy Trinity, the divinity of Jesus Christ, the doctrine of Suffrages for the dead, the purposes of the Holy Sacrifice of the Mass, Transubstantiation, and the perpetual Virginity of Mary Most Holy without incurring any canonical sanction (if this were not the case, almost all the consultors of Vatican II and the present Roman Curia would already have been excommunicated); but “if you do not follow the Council or you interpret it in your own way, as you wish, you are not with the Church.” Bergoglio’s gloss on this demanding condemnation of any criticism of the Council leaves us truly incredulous:

It makes me think of a group of bishops who left after Vatican I, a group of lay people, groups, to continue the “true doctrine” that was not that of Vatican I: “We are the true Catholics.” Today they ordain women.
Click to expand...

It should be noted that “a group of bishops, a group of lay people, groups” that refused to adhere to the infallibly defined doctrine of the First Vatican Ecumenical Council were immediately condemned and excommunicated, while today they would be welcomed with open arms “regardless of faith,” and that the Popes who at that time condemned the Old Catholics would today condemn Vatican II and would be accused by Bergoglio of “not being with the Church.” On the other hand, the lectresses and acolytesses of recent invention are not a prelude to anything else except the place of “Today they ordain women” where those who abandon the teaching of Christ invariably end up.

Curiously, ecumenical openness, the synodal path and the pachamama do not prevent the showing of intolerance towards Catholics whose only fault is that they do not want to apostatize from the Faith. And yet, when Bergoglio speaks of “no concession to those who try to present a catechesis that does not agree with the Magisterium of the Church,” he disavows himself and the alleged primacy of the pastoral over doctrine that is theorized in Amoris Lætitia as the conquest of those who build bridges and not walls, to use an expression dear to the courtiers of Santa Marta.

So from now on we could update the incipit of the Athanasian Creed: Quicumque vult salvus esse, ante omnia opus est, ut teneat Modernistarum hæresim.