Feast of the Holy Machabees
Adapted from The Liturgical Year by Abbot Gueranger​
The August heavens glitter with the brightest constellations of the sacred cycle. Even in the 6th century, the Second Council of Tours remarked that this month was filled with the Feasts of Saints. My delights are to be with the children of men, says Wisdom; and in the month which echoes with her teachings, she seems to have made it her glory to be surrounded with blessed ones, who, walking with her in the midst of the paths of judgment, have in finding her found life and salvation from the Lord. This noble court is presided over by the Queen of all grace, whose triumph consecrates this month and makes it the delight of that Wisdom of the Father, Who, once enthroned in Mary, never quitted Her. What a wealth of divine favors do the coming days promise to our souls! Never were our Father's barns so well filled as at this season, when the earthly as well as the heavenly harvests are ripe. 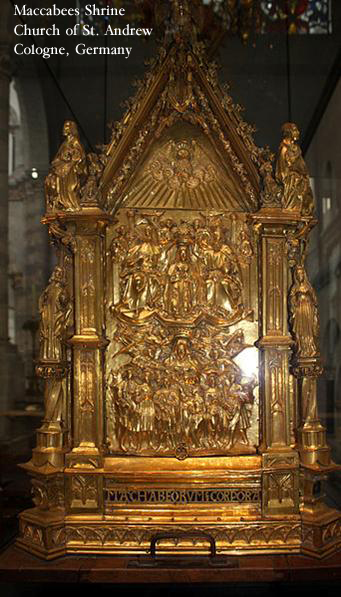 ​
While the Church on earth inaugurates these days by adorning Herself with St. Peter's chains as with a precious jewel, a constellation of seven stars appears for the third time in the heavens. The seven brothers Machabees preceded the seven sons of St. Symphorosa and the seven sons of St. Felicitas in the bloodstained arena; they followed Divine Wisdom even before she had manifested her beauty in the flesh. The sacred cause of which they were the champions, their strength of soul under the tortures, their sublime answers to the executioners were so evidently the type reproduced by the later martyrs, that the Fathers of the first centuries with one accord claimed for the Christian Church these heroes of the synagogue, who could have gained such courage from no other source than their faith in the Christ to come. For this reason they alone of all the holy personages of the Old Covenant have found a place on the Christian cycle of Saints; all the martyrologies and calendars of East and West attest the universality of their cultus, while its antiquity is such as to rival that of St. Peter's Chains in that same basilica of Eudoxia, where their precious relics lie.

At the time when in the hope of a better resurrection they refused under cruel torments to redeem their lives, other heroes of the same blood, inspired by the same faith, flew to arms and delivered their country from a terrible crisis. Several children of Israel, forgetting the traditions of their nation, had wished it to follow the customs of strange peoples; and the Lord, in punishment, had allowed Judea to feel the whole weight of a profane rule to which it had guiltily submitted. But when King Antiochus, taking advantage of the treason of a few and the carelessness of the majority, endeavored by his ordinances to blot out the divine law which alone gives power to man over man, Israel, suddenly awakened, met the tyrant with the double opposition of revolt and martyrdom. Judas Machabeus in immortal battles reclaimed for God the land of his inheritance, while by the virtue of their generous confession, the seven brothers also, his rivals in glory, recovered, as the Scripture says, the law out of the hands of the nations, and out of the hands of the kings (1 Mach. 2:48). Soon afterwards, craving mercy under the hand of God and not finding it, Antiochus died, devoured by worms, just as later on were to die the first and last persecutors of the Christians, Herod Agrippa and Galerius Maximian. 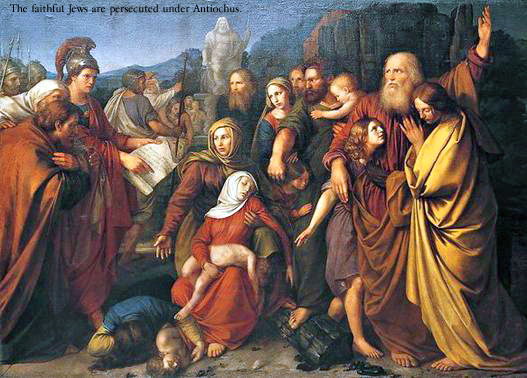 The Holy Ghost, who would Himself hand down to posterity the acts of the protomartyr of the New Law, did the same with regard to the passion of Stephen's glorious predecessors in the ages of expectation. Indeed, it was he who then, as under the law of love, inspired with both words and courage these valiant brothers, and their still more admirable mother, who, seeing her seven sons one after the other suffering the most horrible tortures, uttered nothing but burning exhortations to die. Surrounded by their mutilated bodies, she mocked the tyrant who, in false pity, wished her to persuade at least the youngest to save his life; she bent over the last child of her tender love and said to him: My son, have pity upon me, that bore thee nine months in my womb, and gave thee suck three years, and nourished thee, and brought thee up unto this age. I beseech thee, my son, look upon Heaven and earth, and all that is in them: and consider that God made them out of nothing and mankind also: so thou shalt not fear this tormentor, receive death, that in that mercy I may receive thee again with thy brethren (2 Mach. 7:27, 28, 29). And the intrepid youth ran in his innocence to the tortures; and the incomparable mother followed her sons.

The Breviary Lesson is taken from a sermon of St. Gregory Nazianzen:

What [shall I say] of the Machabees? For this festal day is celebrated in their name by this present congregation. Although by many they are not held in honor, because they did not enter on the conflict after Christ, yet they are worthy to be honored by all, because they showed courage and constancy in defense of the laws and institutions of their fathers. For if they suffered martyrdom before the Passion of Christ, what would they have done, if they had suffered persecution after Christ, and if they had had, as a model to be imitated, His death, which He accepted for our salvation? For, if they showed such and so great a courage, when they had no example before them, would they not have been even more courageous in the battle, if they had had that example before their eyes? There is even a certain mystical and hidden reason, which seems highly probable to me, and to all who love God, that none of those who suffered martyrdom before the coming of Christ could have attained to it without faith in Christ.