The Army of Mohammed is Awakened 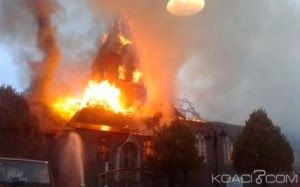 "The Army of Mohammed is Awakened" -- Some Dead, 45 Destroyed Churches: The Price of Satire

(Niamey) A high price was paid for the printing of the Muhammad caricature on the front page of radical left-wing satire sheet Charlie Hebdo. A price that others had to pay, not by the print makers in Paris. While the West, particularly the France of Hollande's "republican march" insisted that troding on the religious beliefs of others, the bill of the media mockery of human life is presented elsewhere. A bill that is paid at thousands of kilometers distance with the blood of those whose only "fault" is to confess Christ. The deadly interaction between Islamism and relativism could be hardly more brutally expressed.

In a message to the nation, which was distributed on 17 January, Niger President Mahamadou Issoufou announced that four burned bodies were found in the remains of burned churches in the capital of Niamey. A fifth dead was found in Zinder where last Friday a wild rally against Charlie Hebdo spun out of control. In total, there are at least ten dead. With a hail of stones, Muslim protesters hurled stones at police before them. Two more churches were burned in Maradi, one in Gouré, three in the capital alone where twelve of fourteen Catholic churches were "profaned, pillaged and destroyed," as Archbishop Michel Cartatéguy reported with tears in his eyes. "Everything is burned, it is nothing more, everything is in ruins and ashes," said the archbishop to Vatican Radio . A total of 128 injured people have reported injury. 189 people were arrested.

Islamist Banner Reading "I Sacrifice my Father and my Mother for our Prophet"
A total of 45 churches were invaded, destroyed and set on fire. There were five hotels and 36 restaurants as well as the orphanage of a Christian school. The figures clearly show the violent anti-Christian thrust. Bibles were torn up and burned in the street. Subsidiaries of French companies were devastated and French flags burned. The French Embassy urged all Frenchmen explicitly not to leave their homes.

The capital's cathedral was secured with great difficulty through a police cordon against attacking Islamists. Although the authorities had issued a ban on meetings, a thousand Muslims tried to storm the Episcopal Church. They carried banners that read: "The army of Muhammad has awakened" and "I sacrifice my father and my mother for our prophets."

Or is Life Just Satire?
"Those who persecute the Christian, understood nothing," said President Issoufou trying to smooth everything over. Interior Minister Hassoumi Massoudou announced that among the demonstrators, flags of Nigerian Islamist Boko Haram militia appeared. The victims in Niger (17 million inhabitants, of which 80 per cent Muslims) as in other Islamic countries, have no personal guilt. They have no share in those who regard the disdain of religion as "law", despite and in spite of all. Do the many dead touch the conscience of those who are scribbling around with their pencils in the air? Whether someone asks pardon of the Christians of Niger or at least sympathizes with them that mourn their dead and mourn before the ruins of their destroyed churches? Or, for some is life just a satire after all?