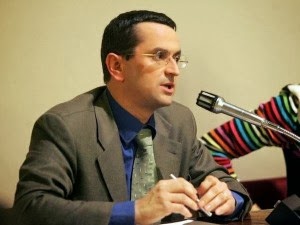 Mario Palmaro is Dead -- The Suffering Critic of
Pope Francis is Silenced ​
(Monza) The well-known Catholic legal philosopher and journalist Mario Palmaro has died on Sunday night , Catholic who was one of the sharpest and most perceptive critics of the pontificate of Pope Francis, of the consequences of a long illness.
"This evening it has pleased God to dismiss him from his earthly life. The pain we feel about it can be found only in the consolation of the Catholic faith, the intrepid defender and witness he always was. Our affection goes out to his wife and his children, to whom we are close with our heart. We ask all friends to pray with that confidence of Providence, which He has taught us, by accepting the suffering in Christian humility and is also to become an edifying example to us. “ With these words the editors of Riscossa Cristiana, with whom Mario Palmaro had worked since its inception, greeted his death.

A Life for the Right to Life and Catholic Tradition
Mario Palmaro was born on 5 June in 1968 in Cesano Maderno, a small town in northern Lombardy. He studied law at the University of Milan , he graduated with a thesis on abortion. After, he specialized in studies at the Institute San Raffaele in Milan on bioethics, he was a research associate at the Center for Bioethics at the Catholic University of Milan. Finally, he taught bioethics at the Pontifical University Regina Apostolorum in Rome and Theoretical Philosophy, Ethics, Bioethics and Philosophy of Law at the European University of Rome. A rich intellectual exchange with another defender of the Catholic cause, the historian Roberto de Mattei, there was at the European University.Palmaro was one of the ardent defenders of the Motu Proprio Summorum Pontificum of Pope Benedict XVI. and was one of the strongest critics of a "miserable, partly shabby small mind" that impede with some bishops the Motu proprio.

Together with the Catholic journalists Alessandro Gnocchi, Palmaro published several books and a variety of essays and articles. Palmaro and Gnocchi were the congenial duo of sharp thinking and linguistic dexterity.

A Life in the Defense of the Catholic Church
Palmaro’s rich journalistic output included, among others, his essays in the newspapers Il Foglio and Il Giornale , the monthly journal Studi Cattolici and his work as editor of the Catholic monthly magazine Il Timone . For ten years, he designed his own show at Radio Maria Italy "encounters with bioethics". In the fall of 2013 Radio Maria discontinued its association with them because of Palmaro’s "criticism of the Pope." The immediate cause was his collaboration with Alessandro Gnocchi on 9 October in the daily newspaper Il Foglio published essay, " Christ is Not an Option Among Many, and Certainly Not His Deputy on Earth - Why we do not like this Pope ." A convincing criticism of the papacy of Pope Francis, to whose validity has not changed.

"For me as a Catholic, was what I experienced was one of the most beautiful experiences of my life. I have assured the Pope my unconditional loyalty as a son of the Church. But I looked also recalled my duty, and expressed to the Pope, together with Alessandro Gnocchi’s, my very accurate criticism of his actions. The Pope almost made me not finish the sentence and said he had understood that this criticism was made ??out of love and how important it is for him, to get those,” said Palmaro to the newspaper Libero in an interview about the call.

Immediately prior to the Pope's call, Palmaro and Gnocchi had released another essay critical of the pope: The Church as a Field Hospital of Twitter Followers - Encouragement inversely proportional to the clarity of the message? Therein they wrote the almost touching Catholic, descriptive and certainlyl prophetic statement:

In some little, out of the way church there will be always be a priest who celebrates the Mass in a holy way; in a little apartment a solitary old woman with unshakeable faith will say the Rosary; in a hidden corner of a House of Divine Providence a Sister will look after a baby considered by all as having no worth. Even when all seems lost, the Church, the City of God, continues to radiate its light on the City of Man.
Click to expand...

A Kingdom of Journalistic Work
Among the numerous books, often published Mario Palmaro in collaboration with Alessandro Gnocchi, only those of recent years may be mentioned to give an idea of ??the tireless work of this Catholic intellectual.

"This Pope Likes Too Much" - Palmaros’ last book being printed 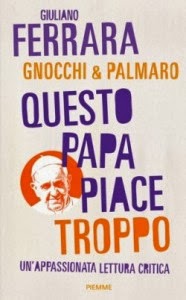 The last book by Mario Palmaro is currently under pressure. Written by Alessandro Gnocchi and Giuliano Ferrara, the editor of the daily newspaper Il Foglio , it bears the title " This Pope Likes Too Much. The passionate and critical reading of a pontificate," Piemme, 2014. The book will be presented on 25 March in Rome. Mario Palmaro will no longer be among the three announced authors.

Whether the two critics will change something because of the phone call of the Pope, he was asked in November of last year? No, replied Mario Palmaro, "we will continue down the path we have always gone by, we follow our conscience, always connected to the Pope and the Church in faithfulness, but we will continue on our way, just because of this loyalty and love.” The book is also committed to this principle.

From the Catholic Faith of the Disease and his Family
In an interview with a magazine of Dehonianerordens he said after the Pope's call about his disease and his family:
"Man looks at the cross and understands that this is the heart of faith: without sacrifice, Catholicity does not exist. Then you thank God that he has made ??you a Catholic, a very small Catholic, a sinner, but in the Church has a caring mother.

"The disease is therefore a time of grace, despite the vice of meanness that has accompanied us for a lifetime, or even worse. It is as if the agony would have been used and you fight the destiny of the soul, for its own salvation no one can be sure.
On the other hand, the disease allowed me to get to know an impressive number of people who want good for me and who pray for me, families who pray the rosary at night with the kids for my recovery, and I lack the words to describe the beauty of this experience. It is a preview of God's love in eternity. The biggest pain I feel, is the idea of ??having to leave this world. I like it so much, that is so tragic but at the same time so beautiful, to let go of so many friends, my relatives, but most of all to leave behind my wife and my children, who are still children. Sometimes I imagine my house, my empty study and life will go on there even if I will not. It is a painful, but very realistic idea. It makes me understand that I was an unprofitable servant, and I am, and that all the books I have written, all the lectures I held and the articles that I have written, are ultimately only straw.
But I hope for a merciful Lord and that other parts of my work, my aspirations and my struggles to pick up and carry on, will continue with the eternal duel. "