I wrote to you one month ago to inform you that I would be taking legal action against the 'Anti-Discrimination Thought Police' in New South Wales for the ongoing and unlawful persecution I have faced for my views on marriage, family and morality.

It has taken a great deal of effort and preparation.

I am seeking declarations that the President of the ADB, President of NCAT and the Local Court have no power to hear complaints against me and prohibition orders preventing any further action.

I have been forced to take this action after continued attempts to hear complaints against me, despite a unanimous High Court ruling in April that it was unconstitutional to do so.This shows that the 'Thought Police' are prepared to break the law to enforce their radical worldview on all Australians.

They are menace to society and freedom and should be abolished.

I must admit that I have been increasingly stressed after four years of unlawful litigation and persecution. However, I am very proud to have taken this latest step.

This will be a landmark case and it will put the 'anti-discrimination industry' on trial for the first time in Australian history. In essence, we are now on the attack and we need to continue.

Thank you for your support. I could not have reached this point without your generosity, encouragement and prayers.

I must continue to focus on this case and so I will not be writing for my website in the short term. I find this extremely frustrating but I have no doubt that effort required for this battle will be worth it.

However, I do leave you with this reminder that insane political-correctness has overtaken our military.

The Royal Australian Navy is now having its sailors and officers wear pink nail polish to show their support for 'diversity': 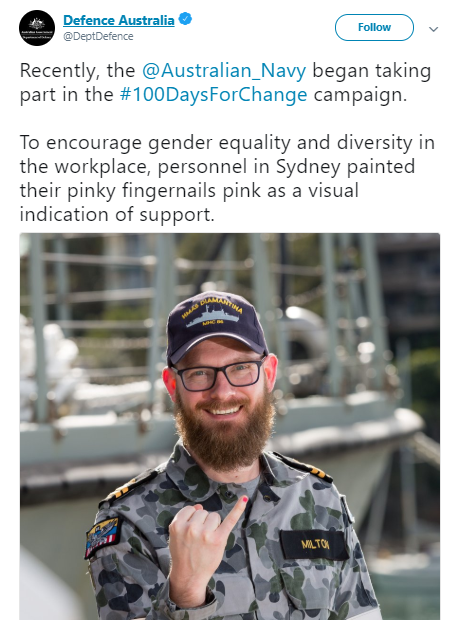 I was sacked by this mob for refusing to participate in this rubbish. That sacking is my badge of honour.

I will keep you informed as legal matters develop.