Subserviency in the SSPX 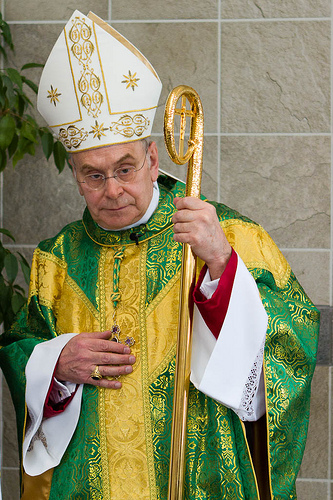 Last Friday, February 23, 2018, the ultra-liberal Bishop Foys , of the diocese of Covington, KY, visited the chapel / school Our Lady of the Assumption belonging to the FSSPX. He toured the buildings of the secondary and primary school, as well as the chapel, and had lunch with the prior, Fr. Daniel Muscha, and some other school officials . When he visited the elementary school building, grades K-7, he was greeted with Catholic hymns sung by the children .

Many parents found out about this visit only the night before, and some parents kept their children at home to avoid going to school that day. A parishioner told me that he sent a text message to Fr. Musha and asked him what was happening. The Father told him (paraphrasing): "Mons. Foys asked for a visit and since he is our bishop , we did not want to say no. The Father offered to meet and discuss this event in person with the parishioner, but the Father has not responded to attempts to schedule this meeting.

This parishioner also told me that last year, when Fr. Wegner was in the city, he visited, accompanied by Fr. Musha, the bishop's office to greet him.
---------------------------
The school has more than 200 children and the parish has around 400-500 people in total - a very large and rapidly growing chapel. I also think that it is a form of psychological warfare, to condition the laity to slowly accept the future reality of being under the local bishop . I am sure that this is not an isolated incident and that it has happened in other chapels of the country.
---------------------------
Here is a summary of the "prowess" of this ultraliberal Bishop Foys:
1. The "Right to Life" group of KY del Norte is one of the most conservative and active of KY. There are so many Catholics in the northern KY and Cincinnati area that this "right to life" group often affects many political careers and has done a lot of good. Bishop Foys has told his diocese to cut ties with this group because they are not "collaborative" with opposing views.
http://www.wave3.com/story/5588139/diocese-bars-area-right-to-life-group-from-churches?clienttype=printable

2. Bishop Foys rejected the publication of an ad in the diocesan newspaper for a public march of the rosary in honor of Our Lady of Fatima, organized by the traditionalists of the area.

3. The Diocese of Covington has a very active homosexual community, supported by the Bishop .
Letter from Bishop Foys about the SSPX (2013):

To the faithful of the Diocese of Covington,

Our Holy Father, Emeritus Benedict XVI, lifted this excommunication during his pontificate. When he did so, he declared: " Indeed, doctrinal questions remain, and until they are clarified, the Fraternity has no canonical status in the Church and its ministers can not legitimately exercise any ministry . "

It is morally unlawful (illegal) for the faithful to participate in the Masses of the Society of St. Pius X, unless they are legitimately prevented from participating in a Mass celebrated by a Catholic priest in good standing in the Church (cf. Code of Canon Law, canon 844.2). The fact of not being able to attend the celebration of the "Tridentine" Mass is not considered sufficient reason to attend the Masses offered by the priests of the Fraternity of St. Pius X. Participation in such Masses and in the administration of the sacraments in the chapels of the Fraternity Saint Pius X can, over time, lead to a schismatic habit of thought and heart as one slowly becomes imbued with a mentality that separates the Magisterium from the Holy Roman Catholic Church.

Those faithful who desire the Holy Sacrifice of the Mass according to the extraordinary form ("Tridentine" Mass), can find these valid and lawful Masses that are celebrated in the Church of All Saints in Walton, KY, every Sunday at 9: 15 am and every first Saturday at 9:15 am Masses according to the Extraordinary Form are also celebrated daily at the Church of San Bernardo in Dayton, KY at 6:30 am and on Sundays at 8:00 am

The doctrinal questions that remain unresolved between the Roman Catholic Church and the St. Pius X Fraternity are not insignificant. A special Pontifical Commission, Ecclesia Dei , under the auspices of the Congregation for the Doctrine of the Faith, continues working to achieve the necessary resolution.
Until that is achieved, the lack of full communion of the Fraternity of St. Pius X with the Roman Catholic Church and our Holy Father the Pope, continues to hurt the unity with which our Lord and Savior Jesus Christ endowed His mystical body, the Church. Therefore, let us all pray for the Church so that her unity may be healed for the glory of God and the salvation of souls.

Given at the Chancery of the Diocese of Covington on May 23, 2013, Year of Our Lord.