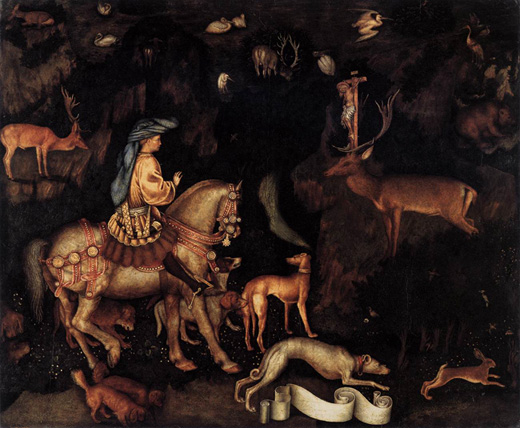 St. Eustachius, His Wife and Sons, Martyrs
by Father Francis Xavier Weninger, 1876​
The life of St. Eustachius is so wonderful, that there are some who consider it a pious legend, rather than a true biography. The reason of this is, that they do not observe how miraculously the Lord often acts with His Saints, and by what unusual paths He leads them to the end which He has prepared for them. Holy Writ gives us more than one example of this, as, in Joseph, the son of the holy patriarch Jacob, and in David. The lives of these show clearly that we ought not to doubt a story because it contains many astonishing events, especially if it is proved by indisputable, ancient testimonials. As we possess these in regard to the following story, we have no hesitation in placing it before our readers.

St. Eustachius was born and educated in paganism; his name, before he was baptized, was Placidus. He sought glory in military exploits, and gave, under the Roman emperors, so many proofs of his generalship, that he became highly distinguished, and gradually rose to the dignity of a commander in chief. He had none of the vices usual to pagans, but on the contrary, conducted himself very praiseworthily. When not in the field, he passed his time in hunting. One day, while he was pursuing a large deer, it suddenly turned and stood still. Placidus was astonished to see between its antlers a Crucifix, surrounded by a bright light, and to hear from its mouth the same words which our Lord had spoken to Saul, the persecutor of the first Christians: "Placidus, why dost thou persecute me? I am Jesus, who died for love of thee, and who will save thee." Placidus, greatly surprised, fell upon his knees and said: "What dost thou wish me to do?"

"Go into the city," was the answer; seek a priest, and be baptized, with thy wife and children; and then return hither."

Placidus obeyed the heavenly voice, went into the city, sought and found a priest, who instructed and baptized him, his wife, and his two sons. Placidus received in baptism the name of Eustachius; his wife, who had been called Tatiana, was named Theopista; the elder son, Agapius, and the younger, Theopistus. After this had taken place, Eustachius returned into the forest, humbly praying that God would further make His holy will known to him. The Saviour appeared to him as before, saying: "Thou hast done well; thou hast been obedient. Now, being a Christian, prepare thyself to suffer. A great struggle is approaching; but fear not; be constant. I give thee the assurance of my assistance, and promise thee the crown of eternal glory." Eustachius, although at first frightened at these words, submitted to the divine will, knowing that the Almighty would be with him. His wife and sons entered into the same sentiments, when he had told them what had happened to him; and they all resolved to take willingly from the hand of God, all the trials with which He might be pleased to burden them.

The occasion for showing their fidelity soon presented itself. By sickness and misfortune, Eustachius became so poor, that he was obliged secretly to leave the city with his family; and he determined to go to Egypt, as he was not known there. When they were already on board the ship in which they were to make the voyage, the owner of it, casting his eyes upon Theopista, ordered her to be put on shore again by force, while the ship, notwithstanding all the protestations of Eustachius, set sail. Theopista remained in the power of the godless man: but the Almighty did not permit her to be harmed; for no sooner had he laid hand on her, than God punished him with a sudden death, and thus Theopista was delivered.

Meanwhile, Eustachius continued his sad and dangerous voyage, deeply grieved at the loss of his wife. At length, he happily reached land with his sons, but at a considerable distance from the place of their destination. On their way, they came to a river, where they found neither bridge nor vessel to convey them to the opposite bank. After long deliberation, Eustachius resolved to carry one son after the other over the water. Taking the first, he carried him happily to the opposite side; but when, he returned for the second and had already reached the middle of the stream, to his indescribable anguish, he saw a lion carry off his son. Seeing that any attempt at a rescue would be madness, he turned round to go back to his other son, but before he could reach him, another wild beast seized him also and dragged him into the forest. There stood Eustachius, once so prosperous, without wife, without children, all alone, without human aid, in a strange land. The Christian hero, however, remembered the words of his Saviour, and burying his grief deep in his heart, he submitted to Divine Providence.

Not knowing what to do for his livelihood, he hired himself to a peasant, and served him, not without many an inward struggle, for fifteen long years. It happened that at the end of these fifteen years, the enemy invaded Italy, and the Emperor Adrian, remembering his valiant general Placidus, searched everywhere for him. They found him at last, and brought him to the emperor, who made him commander-in-chief of the entire army, and ordered him to march against the enemy. Eustachius obeyed the command, marched, in the name of the Lord of Hosts, against the enemy, conquered him, and returned, laden with rich spoils to Rome. While thus on his homeward march, he once encamped near a village to which his soldiers frequently went; and it was here that God designed to reunite the Christian hero, Eustachius, with his spouse and his two sons, whom he had long thought lost forever. Both sons served as soldiers and were in the same army which was now returning to Rome. But they did not know each other.

One day, while both were taking their dinner with some of their comrades before the door of a house in the village, they began to talk of their past life. One of the brothers said: "I am the son of a great general, who fled with my mother, my brother and myself from his home. What became of my mother I do not know; but I well recollect, that my father, when we had come to a stream, carried my brother over it, leaving me on the shore with the intention of coming back for me. Meanwhile a lion came and carried me off. He would most surely have devoured me, had not some shepherds rescued me. I remained with them, and, in the course of time, I became a soldier." The other related that a wolf had seized him, whilst he was sitting near a river; and that he had remained with the peasants who had saved him, until the war broke out, when he had joined the army. While thus speaking, the two looked at each other, and one recognized in the other his own brother. They embraced and wept tears of joy. Theopista, their mother, served in the same house before the door of which the brothers were sitting. She heard all they said, and concluded from it that they must be her sons. Going up to them, she looked at them closely, and seeing certain marks by which she could not fail to recognize them, she fell upon their necks, and while pressing them to her heart, she said, amid a flood of tears, that she was their mother.

After this, they went to Eustachius, the commanding officer, to tell him what had just happened and to beg his permission to go to Rome, their native place. Hardly, however, had she begun her story, when they recognized each other, and words fail to describe the happiness of that meeting. They all, with joyful voices, praised and blessed the power of Providence, which had so wonderfully brought them together, and against all hope had reunited parents and children. The army pursued its way homeward, and Eustachius, his spouse and sons, returned to Rome. The victorious leader was received amid the rejoicings of the people and with every manifestation of honor. The emperor, who ascribed to the gods the victory his army had won over the enemy, appointed a day of thanksgiving, when great sacrifices should be offered to them. All the officials of the state and army were commanded to take part in the solemn rite. The day came, and of all those who had been ordered to be present, Eustachius alone was absent. The Emperor desired to know the reason, and dispatched a messenger to Eustachius, who returned the answer that, being a Christian, he could not participate in a pagan sacrifice. Enraged at this, the Emperor immediately ordered Eustachius, his wife and sons, to be imprisoned.

Afterwards, he tried with kindness and promises, to win Eustachius to worship the gods, but when he found that all was in vain, he had him, with his wife and sons, cast before lions. These, however, forgot their cruelty, and lying down at the feet of the holy confessors, would not harm them. Adrian, more cruel than the wild beasts of the forest, ordered the Saint, his holy wife and faithful sons, to be thrown into an immense brazen bull, made red-hot. The inhuman sentence was executed. The holy martyrs, by Divine power, remained alive for three days, praising and blessing the great Giver of life and death. At last, when their voices ceased, the bull was opened, and all four were found without life, but also without any injury to their bodies or garments. This glorious martyrdom took place in the year 120.