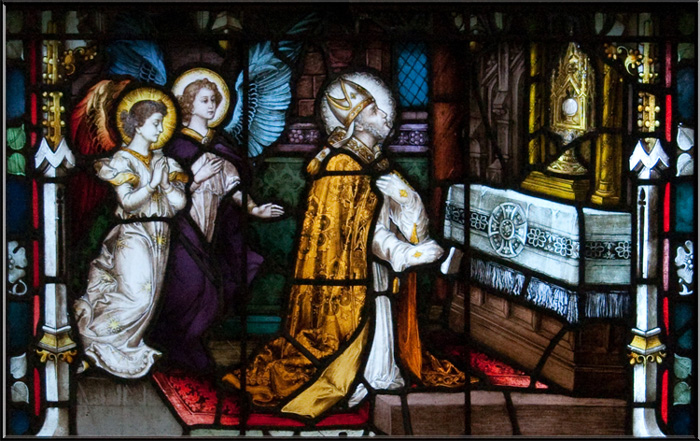 Saint Alphonsus Mary Dé Liguori
1696 - 1787​
St. Alphonsus was born of noble parents, on September 27th, 1696 at the country house of the Liguori family in Marianella, just north of Naples, Italy. He was the first of eight children. His father was Don Joseph Liguori, a distinguished nobleman and captain of one of the royal galleys. His mother was Donna Anna Cavalieri, a refined, deeply spiritual woman, revered by all who knew her.

His spiritual training was entrusted to the Fathers of the Oratory in that city, and from his boyhood Alphonsus was known as a most devout Brother of the Little Oratory. At the early age of sixteen, he was made a Doctor of Law, and he threw himself into this career with ardor and success. A mistake, by which he lost an important case, showed him the vanity of human fame, and determined him to labor only for the glory of God.

He entered the priesthood, devoting himself to the most neglected souls; and to carry on this work he later founded the missionary Congregation of the Most Holy Redeemer.

At the age of 66, he became Bishop of St. Agatha, and undertook the reform of his diocese with the zeal of a saint. He made a vow never to lose time, and, though his life was spent in prayer and work, he composed a vast number of books. They were filled with such science, unction, and wisdom that he has been declared one of the Doctors of the Church.

Saint Alphonsus wrote his first book at the age of 49, and in his eighty-third year had published about 60 volumes, when his director forbade him to write more. Very many of these books were written in the half-hours snatched from his labors as missionary, religious superior, and bishop, or in the midst of continual bodily and mental sufferings. With his left hand he would hold a piece of marble against his aching head while his right hand wrote. Yet he counted no time wasted which was spent in charity. He did not refuse to hold a long correspondence with a simple soldier who asked his advice, or to play the harpsichord (a piano-like keyboard instrument whose strings are plucked by means of quills or leather plectrums) while he taught his novices to sing spiritual canticles. He lived in evil times, and met with many persecutions and disappointments.

During his last seven years, St. Alphonsus was prevented by constant sickness from offering the Adorable Sacrifice of the Mass; but he received Holy Communion daily, and his love for Jesus Christ and his trust in Mary?s prayers sustained him to the end. He died on August 1, 1787.

When the bells tolled, announcing the death of St. Alphonsus, all work and activity in the neighborhood ceased. People dropped everything and set out for St. Michael?s to pray for the intercession of the ?saint who had just died.? There was little thought of praying for the repose of his soul: All people wanted was to be among the first to obtain his aid from Heaven, or to manage to acquire some relic or souvenir of his life.

Four rectors of the Neapolitan houses carried the body into the church and, during the ceremonies, the two faithful servants of Alphonsus, stood at attention beside the bier. Despite all the suffering he had gone through, the features of St. Alphonsus were fresh and ruddy, his appearance tranquil as of one asleep.

He was laid to rest in a vault near the high altar of the church of St. Michael?s, and a marble slab closed the entrance, on which was inscribed: ?Here lies the body of the Most Illustrious and Most Renowned Monsignore Alfonso Maria dé Liguori, Bishop of St. Agatha of the Goths and Founder of the Congregation of the Most Holy Redeemer.