Priests Resistance Avrillé meeting decided to continue under the name SSPX priest Union Marcel Lefebvre. Since now it is the continuation of the work of Archbishop Lefebvre. The USML is true SSPX.

The site Fidele France will soon publish a letter written by the Priests Parents attending the meeting Avrillé, just ended.

Today, July 16, Williamson celebrated the Mass of consecration of the Priestly Union Marcel Lefebvre to the Immaculate Heart of Mary. Deo Gratias. 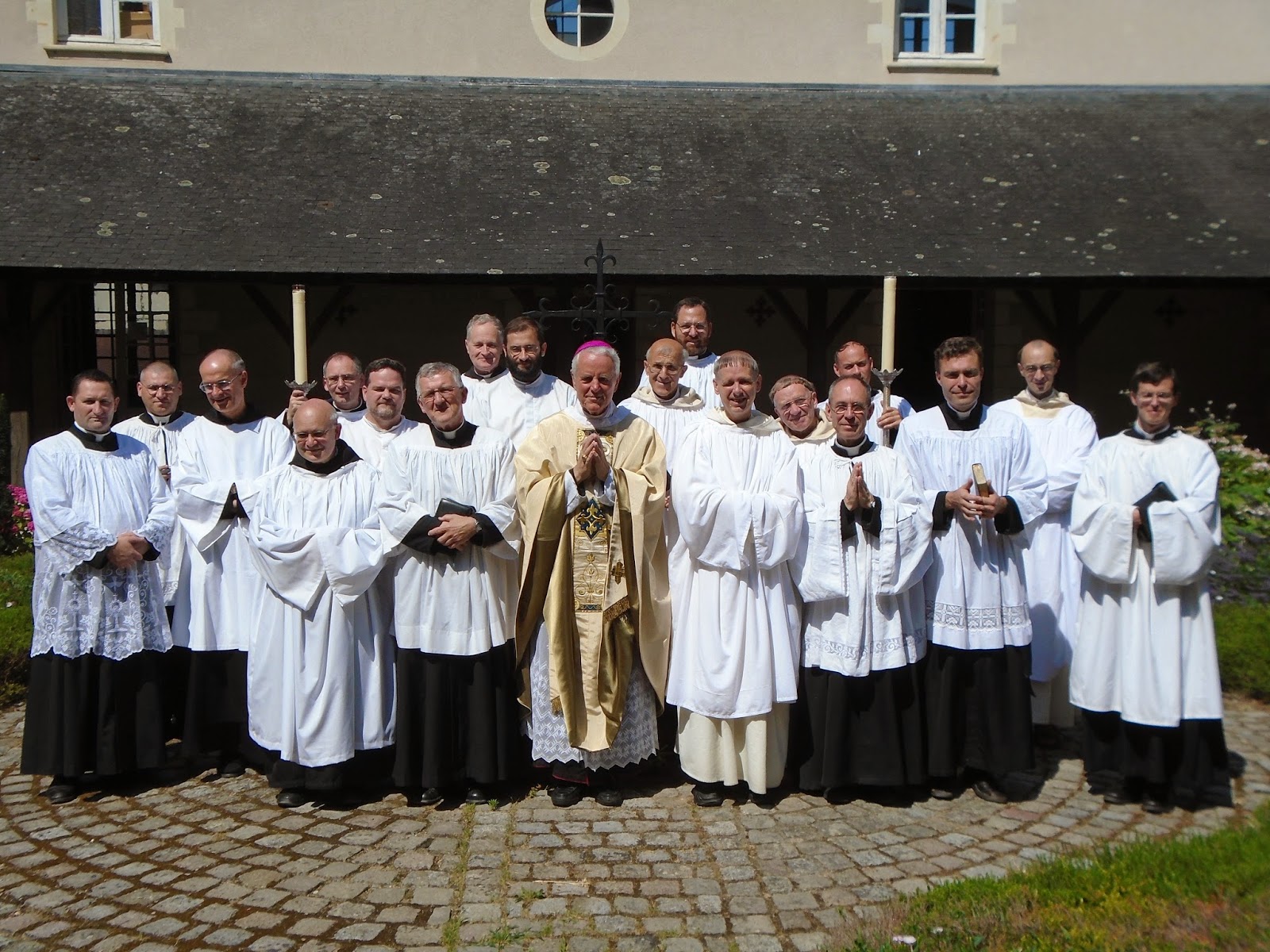 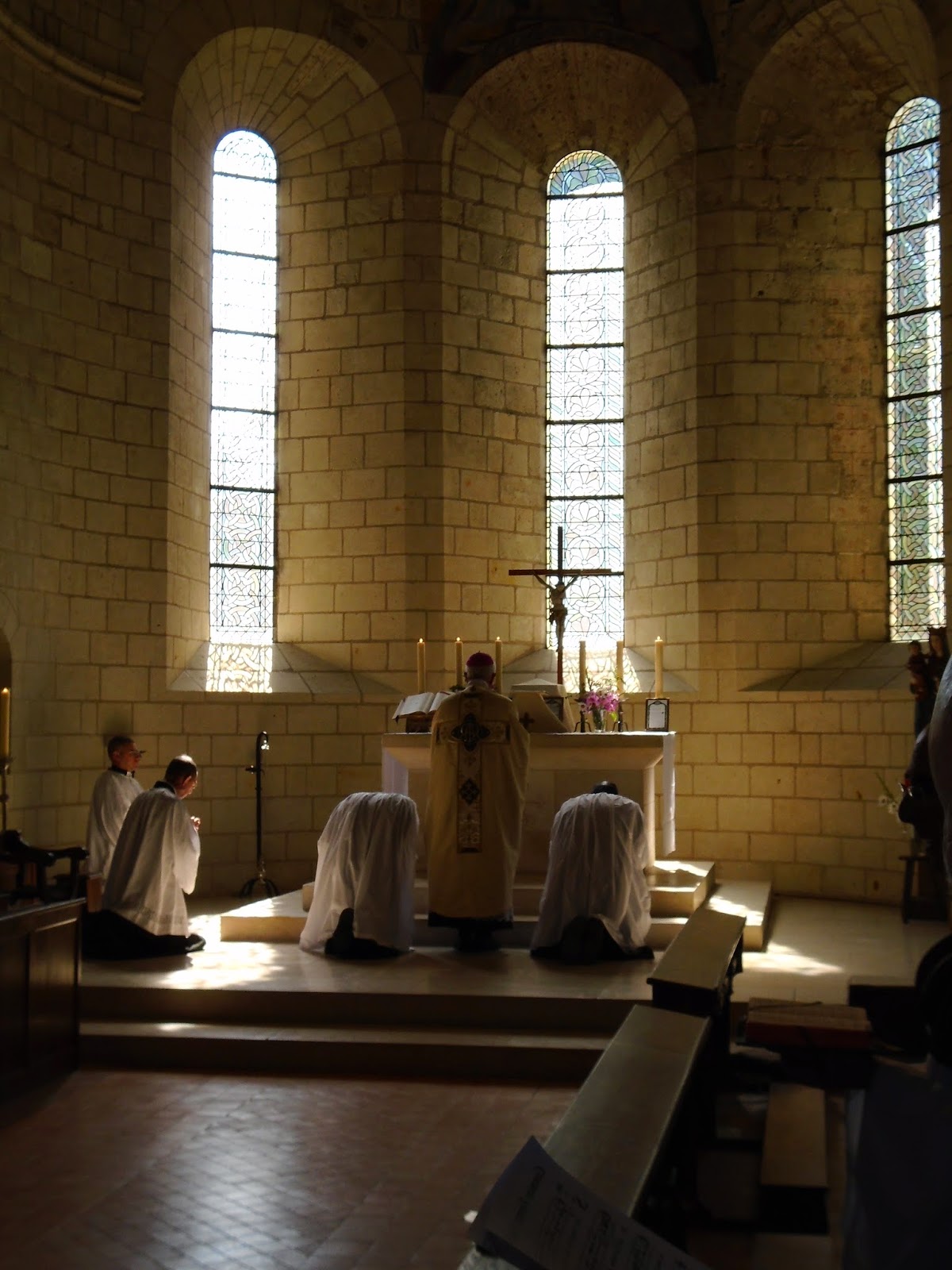 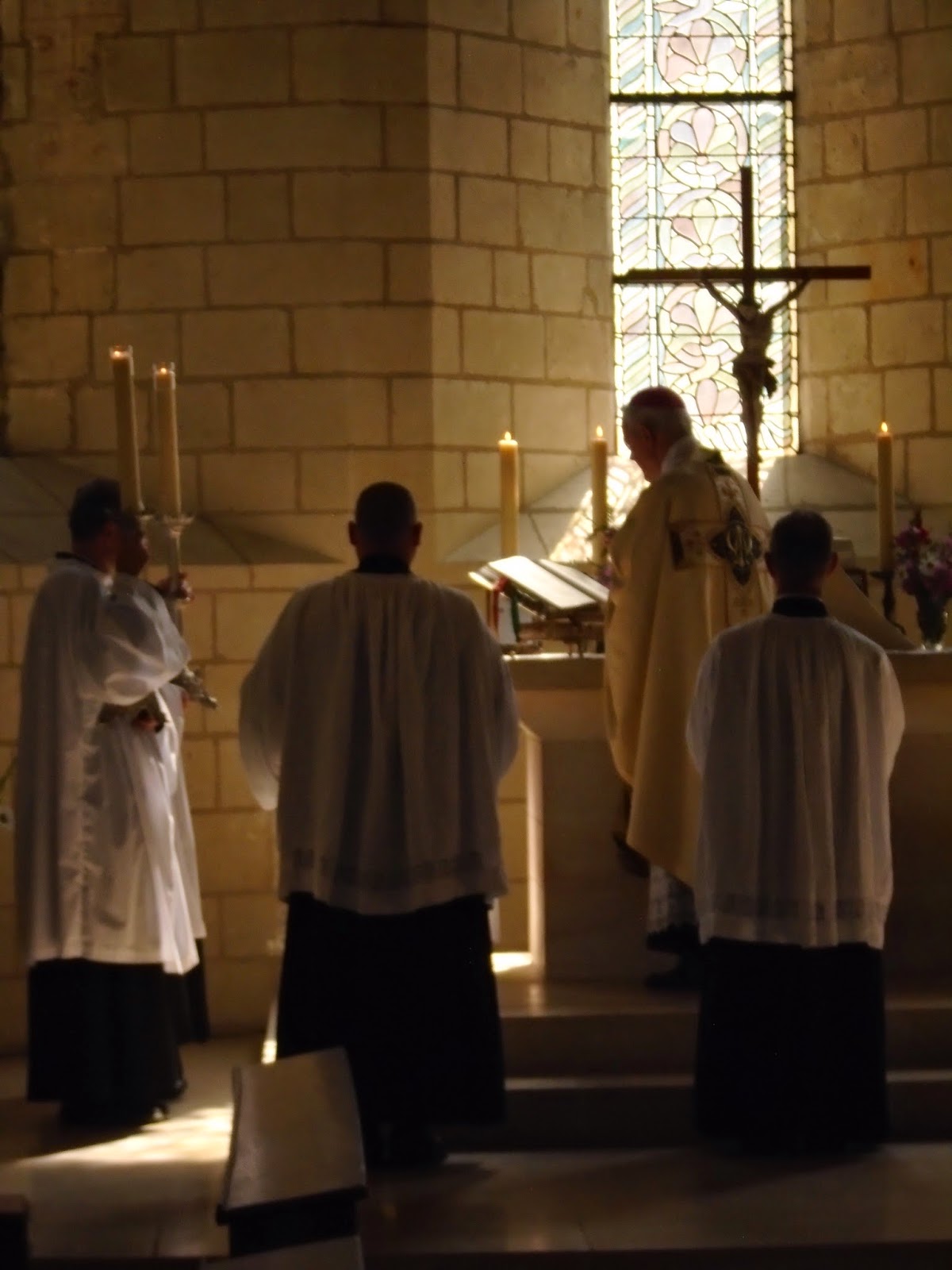 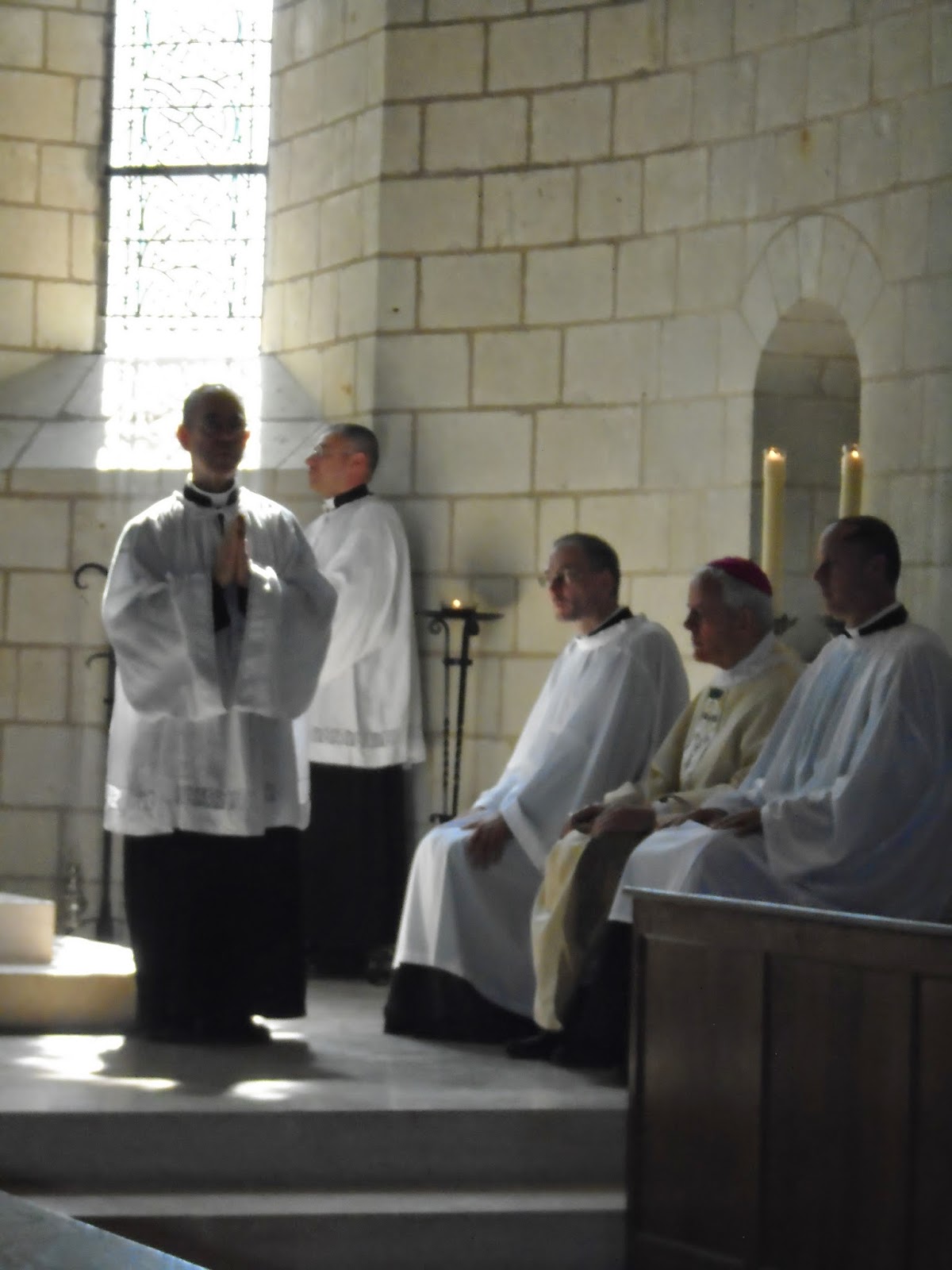 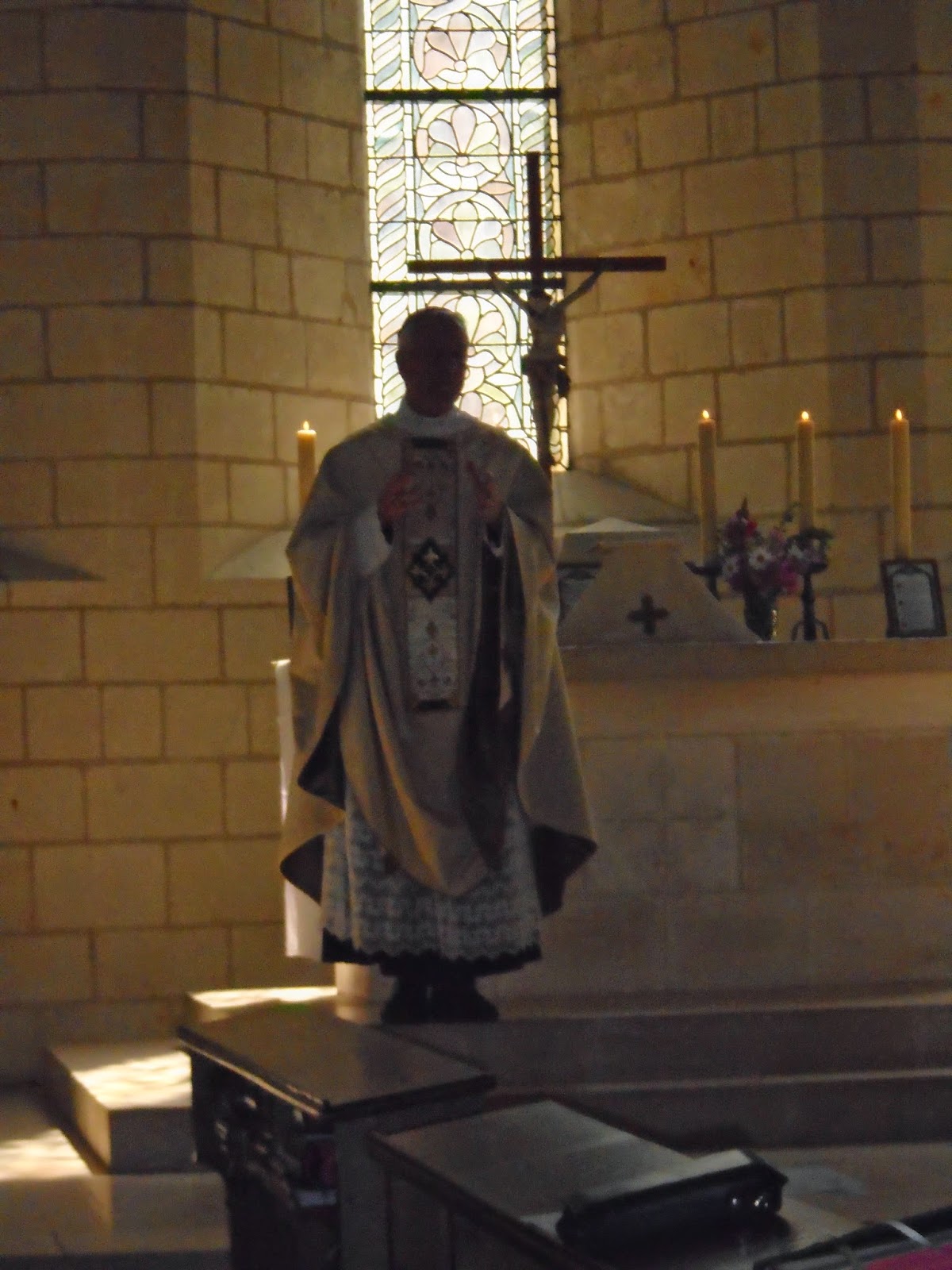 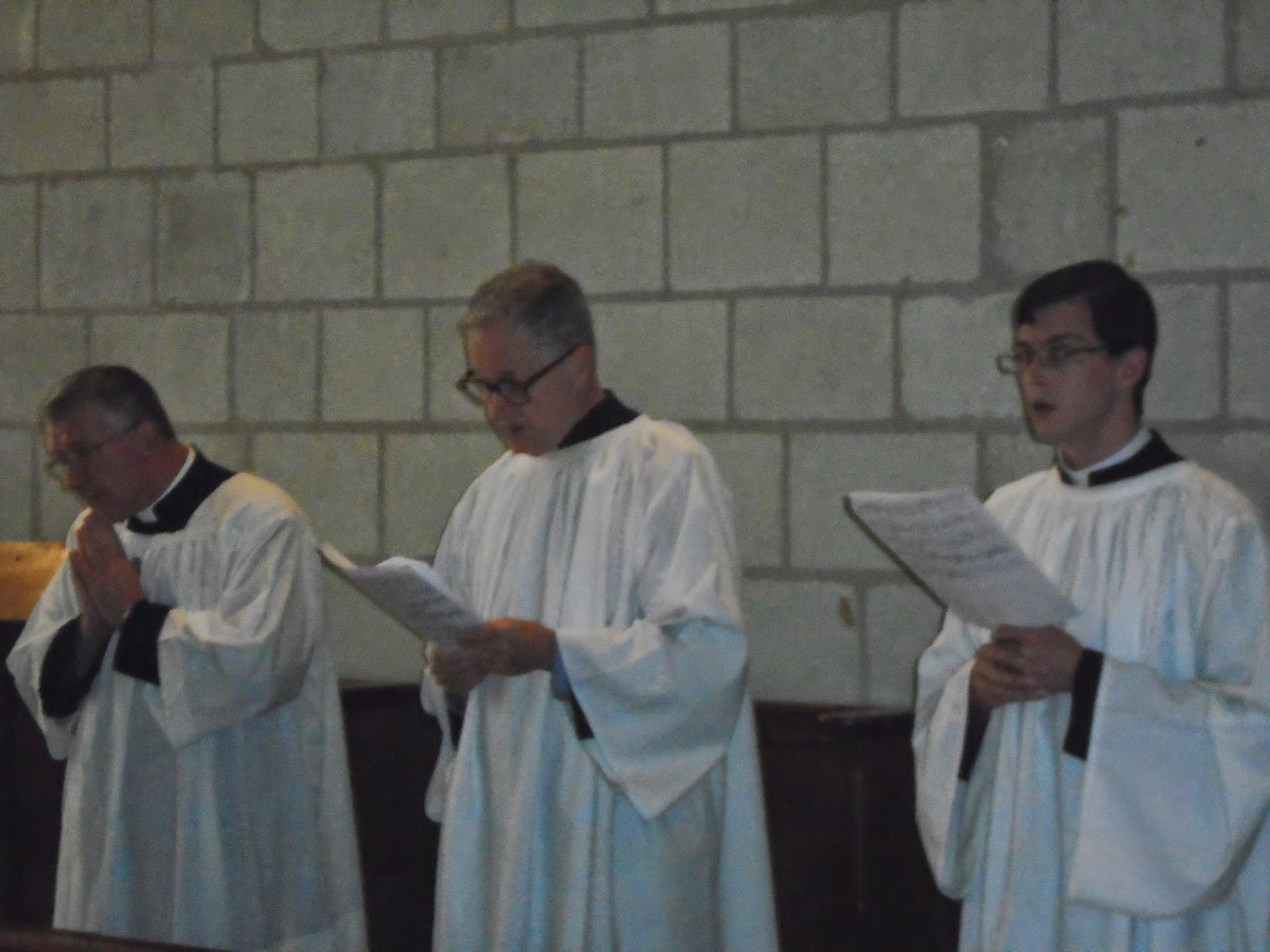 We draw the attention of our readers to a new website, that of the Avrillé Dominicans: www.dominicainsavrille.fr

That these Dominicans friars have now openly joined the resistance is good news. Other good news is the recent meeting of Resistance priests which took place in Avrillé last week. Although attended and observed by Resistance priests from all over the world, the principal business of the meeting was the long overdue organising of the French Resistance priests. The French priests thus formed "The Society of Marcel Lefebvre" and elected Fr. Roland de Merode as superior for France from amongst their own ranks. A 'Declaration of Catholic Fidelity' from this occasion (which can be read in its original French here) can now be read in English translation below.

Faithful to the legacy of Archbishop Lefebvre, and in particular to his memorable declaration of 21st November 1974, we adhere with all our heart and all our soul to Catholic Rome, guardian of the Catholic Faith and of the traditions necessary to keep that Faith, to Eternal Rome, mistress of wisdom and of truth.

Following the example of this great prelate, intrepid defender of the Church and of the Apostolic See, we refuse on the other hand, and have always refused to follow the Rome of neo-modernist and neo-Protestant tendencies, which clearly made itself manifest in the Second Vatican Council, and after the Council in all the reforms and orientations which came forth from it.

These reforms and orientations, in effect, have contributed and are still contributing to the demolition of the Church, to the decline of the missionary spirit, to the propagation of indifferentism – through ecumenism and interreligious dialogue – to the ruin of the priesthood, to the annihilation of the Sacrifice and of the sacraments, to the weakening of pontifical authority, to theological anarchy, to confusion of pastoral action, to the disappearance of the religious life, to a naturalist and ‘Teilhardian’ teaching in the universities, seminaries and catechesis, a teaching born of liberalism and Protestantism, condemned countless times by the solemn Magisterium of the Church.

No authority, even the highest in the Church, can compel us to abandon or diminish our Catholic Faith clearly expressed and professed by the Magisterium of the Church for the past twenty centuries, and in the recent era by the key texts of its anti-liberal and anti-modernist doctrine, notably:

“But though we, or an angel from heaven, preach a gospel to you besides that which we have preached to you, let him be anathema.” (Gal 1,8)

If therefore a contradiction regarding traditional doctrine becomes apparent in the words or actions of a Pope, as well as in the acts of the Roman dicasteries, in that case we choose what has always been taught and we turn a deaf ear to the novelties destroying the Church, and to every “hermeneutic” claiming to show continuity between these novelties and the constant Magisterium of past centuries.

One cannot profoundly modify the lex orandi – in other words, the liturgy – without without modifying the lex credenda. To the new Mass there corresponds: new sacramentary rituals, a new Catechism (C.C.C.), a new priesthood, new seminaries, new universities, a new code of cannon law, an ecumenical bible, new forms of devotion, new criteria of sainthood, a charismatic and Pentecostal church spread out in disparate “communities,” all opposed to orthodoxy to the Magisterium of all time, to Catholic unity.

This reform coming from liberalism and modernism is poisoned through and through. It begins in heresy and ends in heresy. It is therefore impossible for any conscientious or faithful Catholic to adopt these reforms or to submit to them in any way whatsoever.

The only attitude of fidelity to the Church and to Catholic doctrine for our salvation is one of categorical refusal to accept the reforms, even if it means having recourse to exceptional canonical solutions in order to survive – for the salvation of souls is the supreme law – or eventually undergoing unjust condemnations.

That is why, without any rebellion or bitterness or resentment we intend to maintain the complete profession of the Faith under the Magisterium of all time, persuaded that we can render no greater service to the Catholic Church, to the sovereign Pontiff and to future generations.

That is why also, we hold firm to all that has been believed and practised in the Faith, morals, liturgy, catechesis, priestly formation, the institution of the Church, by the Church of all time and codified in the books which appeared before the modernist influence of the Council, awaiting the time when the true light of Tradition shall dispel the darkness which hides the skies of Eternal Rome.

That is why, amongst other things, we note with deep regret that we were not able to confidently welcome, under the Pontificate of Benedict XVI, the Roman initiatives inviting the Priestly Society of St. Pius X to rejoin the Church’s “full communion” as a means of reinforcing traditional sensitivity.
Whatever be the good intentions invoked and the guarantees offered, one could not but fear that this reconciliation would in effect end up, sooner or later, with the neutralisation of the “traditionalist” resistance, as the application of John-Paul II’s motu proprio Ecclesia Dei (1988) proves.

As a result, as long as the Roman authorities do not renounce the errors of Vatican II and undertake to correct their evil effects, it will remain dangerous to envisage any kind of canonical “normalisation” which would place the vital forces of faithful Catholicism in a situation of dependence upon these authorities.

It would be no less risky to become installed in a position of waiting for a hopeless status quo, or to believe that we could get used to a tacit “tolerance” on the part of modernist Rome, which would in practice become a paralysing surveillance by them.

In the state, through love of the Church, through fidelity to the memory and to the combat of Archbishop Marcel Lefebvre, we cannot found our hopes on such compromises – whether made official or not – at the time when a vigorous public confession of the Faith is needed more than ever, faced with the purveyors of all sorts of error.

In this spirit, and in order to promote the return of the Church to its own bi-millennial tradition, inasmuch as it depends upon us, we respectfully and urgently beseech the Sovereign Pontiff to accomplish as quickly as possible, as Vicar of Jesus Christ, successor of Peter and Doctor of the faith, three gestures of the utmost importance:

- Declare that he firmly holds, in the same sense as his predecessors, the doctrine of Gregory XVI, Pius IX, Leo XIII, Pius X, Pius XI and Pius XI, denouncing the errors of “liberal culture”: thus against the fallacious “religious liberty” and the “the rights of man without God” would be reaffirmed the Social Kingship of Jesus Christ;

- Re-establish the anti-modernist oath, prescribed in 1910 and abrogated in 1967, for access to the orders of the ecclesiastical hierarchy: thus a halt would be brought to the process of the corruption of the Faith amongst the clergy and the faithful, which is a cause of the “silent apostasy” of the great mass of Catholics;

- Making use of the privilege of Pontifical Infallibility (cf. the constitution Pastor Aeternus of Vatican I), solemnly condemn the texts of Vatican II which are contrary to the irreformable definitions of the previous Magisterium: thus the pretended authority of the “pastoral” council, “new Pentecost” of the Church, which has shown itself fifty years later to be the greatest disaster in history, would be revoked.

Finally, to obtain peace in the world, we also beseech Pope Francis that he deign to bring about the consecration of Russia to the Immaculate Heart of Mary, according to the request of heaven transmitted at Fatima, and to do so in the form required in this request.

Acting thus, with the grace of God, the help of the Blessed Virgin Mary, of Saint Joseph, and of St. Pius X, we are convinced that we will remain united to the Church, One, Holy, Catholic, Apostolic and Roman, and thus to the successors of Peter, and of being faithful dispensers of the mysteries of Our Lord Jesus Christ in Spiritu Sancto. Amen.