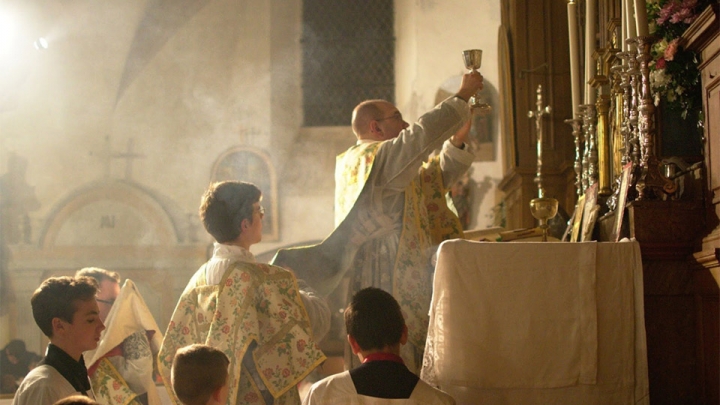 VATICAN CITY, June 1, 2021 — The Remnant has independently confirmed that a Vatican document restricting Pope Benedict XVI’s apostolic letter Summorum Pontificum is backed by at least two Vatican cardinals, is in its third draft, and threatens to thwart the growth of the Traditional Latin Mass and other sacraments particularly among diocesan clergy.

Two senior members of the hierarchy confirmed May 31 that the document, first reported by Messainlatino.it on May 25, is currently under review at the Congregation for the Doctrine of the Faith (CDF).

Multiple sources have also told The Remnant that Pope Francis wishes to soon publish the document, and that it is alleged to be receiving backing in varying degrees from two cardinal consultors to the Congregation for the Doctrine of the Faith: Cardinal Pietro Parolin, Vatican Secretary of State, and Cardinal Marc Ouellet, Prefect of the Congregation for Bishops.

The sources also said that these restrictive measures will most probably be carried out by the Congregation for Divine Worship and the Discipline of the Sacraments and its newly appointed under-secretary Msgr. Aurelio García Marcías, whom Pope Francis is said to have raised to the episcopate for the very purpose of executing these plans.

Several senior Vatican sources have also confirmed that the first draft document was preceded by an introductory letter from Pope Francis that is said to have been very harsh and acrimonious toward the Tridentine Mass.
Click to expand...

The document is now in the third draft, the first two having been thought to be too severe. If it is eventually published, it is likely to roll back the liberalization of the Extraordinary Form of the Mass introduced by Pope Benedict XVI’s 2007 apostolic letter, Summorum Pontificum.

That document authorized any stable group of faithful attached to the “previous liturgical tradition” to ask their local priest for the Mass who “should willingly accede to their requests.” The decree stated that the older form of the Mass was “never abrogated” and that both the Extraordinary and Ordinary Forms were “two expressions” of “one Roman Rite.”

The Remnant has learned that the first draft put strict limitations on the age of the celebrants and is described as somewhat similar to the indult of Paul VI, which allowed elderly priests to continue offering the Tridentine Mass after the promulgation of the Novus Ordo Missae by Paul VI. It also discussed whether to allow or prohibit the administration of the other sacraments in the Extraordinary Form of the Roman Rite.

In its present form, communities and diocesan priests who already offer the Mass in the Extraordinary Form may continue to do so, but diocesan clergy who wish to begin offering the Traditional Mass would have to obtain authorization. Whether local bishops or the Holy See will be responsible for granting such permissions is still under discussion.

The administration of the other sacraments in the Extraordinary Form, i.e. marriage, baptism, confirmation, etc., would be maintained for those who already have permission to celebrate the Traditional Mass.

The third draft moves the office of recourse for matters pertaining to the Traditional Latin Mass and oversight of priestly societies and religious communities that use the pre-1970 Missal, from the fourth section of the Congregation for the Doctrine of the Faith (formerly the pontifical commission Ecclesia Dei) to the Congregation for Divine Worship and the Discipline of the Sacraments.

The first draft initially discussed placing these priestly societies (e.g. Fraternity of St. Peter, Institute of Christ the King, and Institute of the Good Shepherd) and other traditional communities under the Congregation for Institutes of Consecrated Life and Societies of Apostolic Life, two senior Vatican sources confirmed.

Such a move would be considered potentially more problematic for these communities, in light of the way the congregation has handled contemplative orders in the recent past, namely, through the 2018 Instruction Cor Orans, which requires autonomous female monasteries to belong to a wider federation, and asks novices and professed cloistered contemplative nuns to leave their enclosure for initial and ongoing formation, something alien to cloistered contemplative life.

Under the current plan, Msgr. García, who has served as head of office in the Congregation for Divine Worship since 2016, has been elevated to the episcopate in order to assume the responsibilities formerly carried out under Ecclesia Dei by its former president, Archbishop Guido Pozzo. A professor at the Pontifical Liturgical Institute at the Pontifical Athenaeum Sant’Anselmo, Msgr. García is not known to share Benedict XVI’s views on the sacred liturgy, one source describing him as “the most anti-Tridentine Mass person ever known.”

It is not clear yet whether the fourth section of the Congregation for the Doctrine of the Faith will continue to handle doctrinal matters and relations with the Society of St. Pius X.

Several senior Vatican sources have also confirmed that the first draft document was preceded by an introductory letter from Pope Francis that is said to have been very harsh and acrimonious toward the Tridentine Mass. Jesuit Cardinal Luis Ladaria, Prefect of the CDF, strongly opposed both the first draft and the letter, senior Vatican sources confirmed. The letter has since been revised.

Concerns over possible curtailments of the Extraordinary Form arose after the CDF sent a letter to the presidents of bishops’ conferences worldwide asking them to distribute a nine-point questionnaire about Summorum Pontificum. Cardinal Ladaria said the questionnaire was issued because the Pope wanted to be “informed
about the current application” of the apostolic letter.

Approximately thirty percent of the world’s bishops responded to the questionnaire, and more than half of those who responded had a favorable or neutral response, multiple sources confirmed.

One source familiar with the consultation document said that, although the questions were notably biased against Summorum Pontificum, or formulated in a manner that did not always elicit a clear and specific response, what emerged from the questionnaire is how the Traditional Latin Mass has taken root. It has revealed that even in unexpected places, the old Mass is embraced and loved by young people and families, is bearing fruit in flourishing parishes, priestly and religious vocations, and in greater prayer and devotion among the faithful.

On May 31, the French traditional website Paix Liturgique, which was among the first to report on the forthcoming document, published an article titled, “The Summorum Pontificum Galaxy Prepares to Resist!”

Describing Summorum Pontificum as “provisions for peace” that “sought to bring peace to a Church that was sinking deeper and deeper into crisis,” the authors note how “from the very beginning, the traditional movement has been grounded in the action of laymen.”

Their efforts, it continues, were “a surprising and providential manifestation of the sensus fidelium, of the instinct of the faith among the faithful, which defends tooth and nail the lex orandi’s expression of the doctrines of the Eucharistic Sacrifice, the Real Presence, the hierarchical priesthood, and more generally of the transcendence of the mystery: ‘Do this in memory of Me!’”

Should Pope Francis decide to restrict Summorum Pontificum by issuing such a document, Paix Liturgique asserts that “this capacity to resist ‘on the ground’… may well come to include powerful demonstrations and actions.

“Already now,” they add, “in various spots of the globe, they are being given serious consideration.”