Enrique Angelelli: a disquieting beatification despite a dubious background and with an ideological stale smell.

(Rome) It had already become apparent and some had feared that the Argentine Bishop Angelelli would be beatified. The train of dubious canonizations continues unabated.

On October 17, the new substitute of the Cardinal Secretary of State, the Vatican diplomat and Archbishop Edgar Peña, signed a letter (Protocol No. 423.517) as one of his first acts, appointing Msgr. Marcelo Colombo, emeritus bishop of La Rioja, the date for the beatification of Bishop Enrico Angelelli Carletti, former Bishop of La Rioja.
"It is my pleasure to inform you that the Holy Father grants that the celebration of the beatification rite of the Reverend Servant of God, Enrico Angelelli Carletti, Bishop of La Rioja, will take place in this city on Saturday, April 27, 2019. " The Pope will not attend in person, but will be represented by Cardinal Angelo Becciu, Prefect of the Congregation of the Congregation of the Causes of Peña, as a substitute in the State Secretariat.

Who was Bishop Enrico Angelelli Carletti? 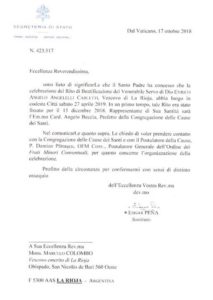 ​
Beatification of Angelelli
​
Bishop Angelelli was a representative of Marxist liberation theology, who had had friendly contacts with the Communist Eastern Bloc since the 1950s, particularly the Pax Movement, which infiltrated the Catholic Church on behalf of the regime. Since the 60s, he was closely associated with the left-wing terrorist movement Montoneros. The Montoneros were part of left-wing extremism that was radicalizing and seeking a violent seizure of power in Argentina, as was attempted in many Latin American countries by communist revolutionary movements with Soviet and Cuban support. The result was terror and counter-terror, with - this is an Argentine feature - right and left Peronists faced each other as enemies. When terror threatened to overthrow the country, the military intervened to restore order, as the generals declared in 1961.

Not only did the dubious left-wing orientation make Angelelli a controversial Church leader during his lifetime, he was described a contemporary pamphlet:
"Anyone who thinks like a Marxist and speaks like a Marxist is also a Marxist!"

Doubtful circumstances of death
Doubtful are the circumstances of his death. Officially, he died in a tragic traffic accident, most likely due to a mistake made by his companion, another liberation theologian and priest belonging to the left-wing Third World Priestly movement supported by Angelelli. His passenger said that he could no longer remember the accident. He quit the priesthood shortly thereafter. 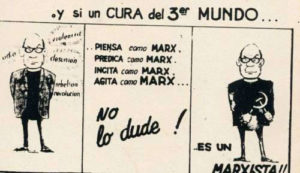 ​
"Who thinks and speaks like a Marxist is also a Marxist"​
​
Several years after the death of Angelelli, another Marxist priest, the Capuchin Antonio Puigjané, suddenly declared that the bishop had actually been assassinated. The order was given by the then military dictatorship. Since then, he has been diligently elaborating on the myth of the murdered "Bishop of the Poor."

Puigjané himself hit the headlines as a left-wing terrorist, as he wanted to topple even then in 1988, five years after the end of the military dictatorship, the already democratic government of Raul Alfonsin.

There were no lack of circles in Argentina and in Western Europe, inside and outside the Church, who willingly jumped on this unusual move and indignantly denounced any involvement of the hated military regime as fact, although no evidence could be presented for such a daring assertion. None of the eyewitnesses of the accident and at the accident testified to anything like this.

Under quite different political auspices - meanwhile, in Argentina, under the moderate left-wing Peronists - the case of the traffic accident was reopened 38 years later and two leading military figures were convicted without concrete evidence, as the principals of an assassination attempt. In the same period, the ex-Capuchin Puigjané was pardoned prematurely, although his terrorist attack had cost eleven lives.

The issue is still controversial in Argentina. Critics speak of a political process, which served less the truth, but to the settling of old scores (see to Angelelli, the situation in Argentina and left myths: The Unequal "Martyrs" ).

Did Angelelli die in odium fidei?
However, whether a traffic accident or assassination, neither in one case or the other are there indications that the death of Angelelli occurred in odium fidei. But hatred of faith is a prerequisite for recognizing a death brought on as a martyrdom for Christ. 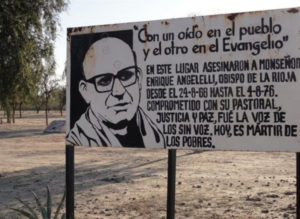 Angelelli, a leftist taboo
​
After Francis had declared Pope John XXIII. an unmiraculous saint, no less doubtfully, he declared the death of Bishop Angelelli an assassination and the bishop as a martyr. The recognition of his death as martyrdom shortens namely the lengthy path of the beatification process, since no miracle is needed.

With the miraculous beatification of Bishop Angelelli by an event, whether a traffic accident or assassination, which is reinterpreted to be a martyrdom, Pope Francis is creating a new, questionable category of "political martyrs."

Last August, another Argentine archbishop, Msgr. Hector Aguer, broke the Angelelli taboo . He asked why not a contemporary of Angelelli, the Catholic intellectual Carlos Alberto Sacheri, to be beatified, who really became a victim of terrorism, but of Marxist terrorism. Sacheri was executed in front of his own children. He had previously pointed out and criticized the Communist infiltration of the Catholic Church with a book.

But in this, the political left is always blind. Meanwhile, the Church leadership seems to have become blind.

What conclusion can be drawn from Pope Francis' unusual approach?

Probably only one: The confirmation of a long-standing suspicion that the obstinate, Argentine Pope wants to canonise a disturbing, highly politicized and long-overstated direction in the Church, the alliance between Christianity and socialism, historically compromised by Soviet dictatorships, terrorism, hostility towards the Church, denunciations, abortion ... Should we list more?