Patroness of those afflicted by sexual temptation

Patroness of those afflicted by sexual temptation​
Blessed Angela of Foligno​ 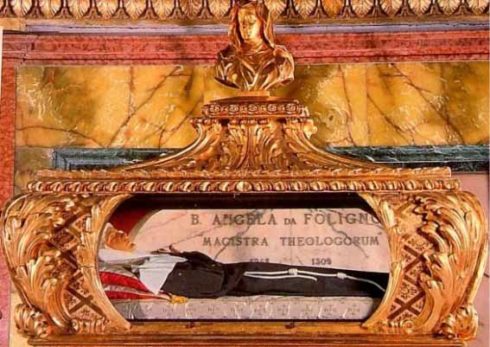 Married at an early age, she loved the world and its pleasures and, worse still, forgetful of her dignity and duties as wife and mother, fell into sin and led a disorderly life. But God, having in His mercy inspired her with a deep sorrow for her sins, led her little by little to the height of perfection and to the understanding of the deepest mysteries. Angela has herself recorded the history of her conversion in her admirable “Book of Visions and Instructions”, which contains seventy chapters, and which was written from Angela’s dictation by her Franciscan confessor, Father Arnold of Foligno. Some time after her conversion Angela had placed herself under the direction of Father Arnold and taken the habit of the Third Order of St. Francis. In the course of time the fame of her sanctity gathered around her a number of Tertiaries, men and women, who strove under her direction to advance in holiness. Later she established at Foligno a community of sisters, who to the Rule of the Third Order added the three vows of religion, without, however, binding themselves to enclosure, so that they might devote their time to works of charity. Angela at last passed away, surrounded by her spiritual children. Her remains repose in the church of St. Francis at Foligno. Numerous miracles were worked at her tomb, and Innocent XII approved the immemorial veneration paid to her. Her feast is kept in the Order on the 30th of March. Bl. Angela’s high authority as a spiritual teacher may be gathered from the fact that Bollandus, among other testimonials, quotes Maximilian Sandaeus, of the Society of Jesus, who calls her the “Mistress of Theologians”, whose whole doctrine has been drawn out of the Book of Life, Jesus Christ, Our Lord.

The life of Blessed Angela has been written by Mariano of Florence and Marx of Lisbon in their chronicles; also by Jacobilll, Vite de’ Santi e Beati dell’ Umbria, and Wadding, Annales Minorum. These writers have principally derived their information from her Book of Visions and Instructions. The editio princeps of this book, known as the Theology of the Cross (Paris, 1598) remains the chief source for her life and teaching. B. Angelæ de Fulgineo Visionum et Instructionum Liber (reprinted Cologne, 1601) was reedited by Bollandus, Acta Sanctorum, I, Jan., 186-234; by Lammertz with German tr. (Cologne, 1851); and Faloci Pulignani (Foligno, 1899); the English translation by Cruikshank (Derby, 1872) has been lately re-issued (New York, 1903). See also Lives of the Saints and Blessed of the Three Orders of St. Francis (Taunton, 1887), I, 536-554.