The more the neo-sspx is immersed in conciliar rome, the more they identify with the pantheon of other conciliar beliefs. This year is no different. The neo-sspx is being represented by Fr. John Brucciani, bursar of Society of St. Pius X giving a speech on "What 'Viva Christo Rey' Really Means" to his confreres and faithful in the Ecclesia Dei groups. Yes...confreres. The neo-sspx by fact is officially in the Ecclesia Dei camp; so they merge freely and identify with like minds accepting conciliarism.

Viva Christo Rey means Long Live Christ the King. That rallying cry joined among other "believers" is an endorsement of unification and support one another for the SAME cause; watered down as it is, but SAME cause.

For American traditionalists, the Catholic Identity Conference has been an informative gathering of diocesan, Fraternity of Saint Peter, Institute of Christ the King, Society of Saint Pius X and other traditional Latin Mass Catholics, assembled under one roof for a weekend.

We have been happy to cover the annual conference in recent years, including when Rorate was a featured speaker (which we pledge to do again when travel time permits). 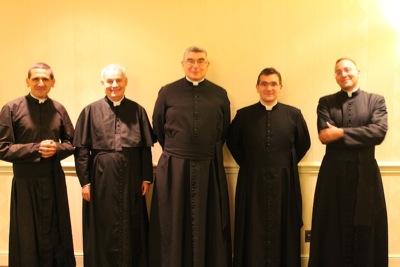 Located near the Franciscan University of Steubenville, the conference will feature several speakers known to traditionalists, including our friends Mike Matt, John Vennari, Chris Ferrara, Rorate's papal conclave correspondent John Rao, and a new addition this year, Steve Skojec, among other terrific speakers.

Viva Christ Rey! The Rise of the Catholic Counter Revolution

9:30 a.m.; Michael Matt; editor of The Remnant; "Agents of Demons: On the Pope’s Commemoration of the Protestant Revolt"

2:00 p.m.; Chris Ferrara; president of American Catholic Lawyers, Inc.; "Rolling Back the Zeitgeist: It Can be Done. It Has Been Done!"

6:00 p.m.; dinner; featured speaker:Fr. Gregory Pendergraft, Priestly Fraternity of St. Peter; "The Virtue of Prudence or the Vice of Cowardice?"

From They Have Uncrowned Him:

"The liberal Catholic spirit, as we have seen, does not have enough confidence in the truth. The conciliar spirit loses the hope of ever attaining the truth: beyond a doubt the truth exists, but it is the object of an indefinite pursuit. ...​
The truth must be sought ...by means... of exchange and dialogue, by which some set forth to the others the truth that they have found or think they have found, in order to help each other reciprocally in the search for the truth. (Dignitatits humanae n.3 - Vatican II document)
​
The Archbishop continues, "Hence in the same way as the unbeliever, the believer should always be searching! Saint Paul, however, really pinned down the false doctors "who are always learning, without ever arriving at the knowledge of the truth" (II. Tim. 3:7)! For his part, the unbeliever could provide the believer with the elements of truth that are lacking to him!

...Evil is the corruption of a good, error is the corruption of the truth, in a subject that nonetheless keeps its nature, certain natural qualities, and certain truths. But there is a very great danger in basing oneself on the residue of truth that error preserves" (pgs. 179-180).
​
What do all these speakers (SSPX, Fraternity of St. Peter, Institute of Christ the King, Conciliar Church, etc) at the 'Catholic Identity Conference' have in common, you might ask? They have all capitulated to the Church of the Council, the Conciliar Church, the Church of the New Advent, as Pope John Paul II called it, the Church of the Religion of Man, as Vatican II has defined itself:

Gaudium et Spes 12
This whole document was indirectly written by the founder of Opus Dei, “Saint” Jose Maria Escriva. He wanted the Church to conform to the modern world and he wanted a one world government. Section 12 of this document utters blasphemy when it says:

“According to the almost unanimous opinion of believers and unbelievers alike, all things on earth should be directed towards man as their centre and crown.”

That should sound familiar to anyone who has read about the plans of Freemasonry, about blasphemies uttered at the United Nations. All the efforts of the Church are directed towards God. All our efforts here on earth should be directed towards God. The old Mass made that clear; the new Mass on the other hand...
http://www.therecusant.com/hesse-vii
http://www.therecusant.com/hesse-vii​
One only needs a Catholic Identity Conference when one does not know the truth of the Catholic Faith! The conference's very name belies the fact that the Conciliar Church is no longer One Holy Catholic Apostolic Church. Talk about a modern identity crisis.
M

Archbishop Marcel Lefebvre:
" The nonsensical "everyone to his own truth" has become the rule; dialogue has become the highest cardinal virtue, dialogue which necessarily leads to concessions. Through misplaced charity the Christian has come to think that he must go one step further than his interlocutors: he is usually the only one to do so.He no longer sacrifices himself for the truth, as the martyrs did. Instead, he sacrifices the truth." Open Letter to Confused Catholics, pg. 77
You must log in or register to reply here.
Share:
Reddit Pinterest Tumblr WhatsApp Email Share Link
Top