[1] And the word of the Lord came to Jonas the second time, saying: [2] Arise, and go to Ninive the great city: and preach in it the preaching that I bid thee. [3] And Jonas arose, and went to Ninive, according to the word of the Lord: now Ninive was a great city of three days' journey. [4] And Jonas began to enter into the city one day' s journey: and he cried, and said: Yet forty days, and Ninive shall be destroyed. [5] And the men of Ninive believed in God: and they proclaimed a fast, and put on sackcloth from the greatest to the least. [6] And the word came to the king of Ninive; and he rose up out of his throne, and cast away his robe from him, and was clothed with sackcloth, and sat in ashes. [7] And he caused it to be proclaimed and published in Ninive from the mouth of the king and of his princes, saying: Let neither men nor beasts, oxen nor sheep, taste any thing: let them not feed, nor drink water. [8] And let men and beasts be covered with sackcloth, and cry to the Lord with all their strength, and let them turn every one from his evil way, and from the iniquity that is in their hands. [9] Who can tell if God will turn, and forgive: and will turn away from his fierce anger, and we shall not perish? [10] And God saw their works, that they were turned from their evil way: and God had mercy with regard to the evil which he had said that he would do to them, and he did it not. 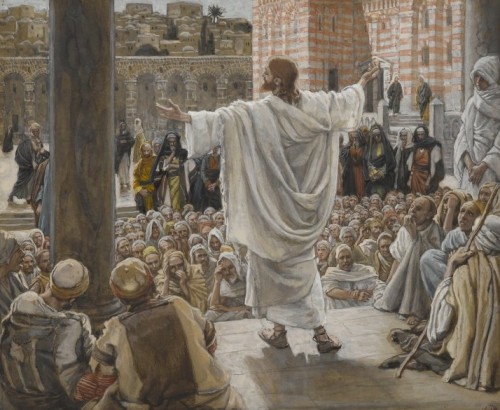 The Pharisees heard the people murmuring these things concerning him: and the rulers and Pharisees sent ministers to apprehend him. [33] Jesus therefore said to them: Yet a little while I am with you: and then I go to him that sent me. [34] You shall seek me, and shall not find me: and where I am, thither you cannot come. [35] The Jews therefore said among themselves: Whither will he go, that we shall not find him? will he go unto the dispersed among the Gentiles, and teach the Gentiles?

[36] What is this saying that he hath said: You shall seek me, and shall not find me; and where I am, you cannot come? [37] And on the last, and great day of the festivity, Jesus stood and cried, saying: If any man thirst, let him come to me, and drink. [38] He that believeth in me, as the scripture saith, Out of his belly shall flow rivers of living water. [39] Now this he said of the Spirit which they should receive, who believed in him: for as yet the Spirit was not given, because Jesus was not yet glorified.

At that time: The Pharisees and the chief priests sent officers to take Jesus. And so on, and that which followeth.
John : 7, 32-39
Click to expand...

A Homily by St. Augustine the Bishop

How could they take him until such time as he willed to be taken? But if they could not take him until he willed to be taken, then these words must mean that the officers were sent to watch his teaching. And what was this teaching? Then said Jesus unto them: Yet a little while am I with you. That is, What ye now seek to do, ye shall do after a little while, but it is contrary to my will that ye should do it now. And why is it contrary to my will? Because yet a little while am I with you, and then I go unto him that sent me. First I must fulfil that which I am sent to do, and thus attain unto my Passion.

Then the Lord added : Ye shall seek me, and shall not find me; and where I am, thither ye cannot come. In these words he foretold that he would rise from the dead, and that as long as he was with them, they would not acknowledge him; but that afterwards, when they saw that the multitude already believed in him, they would seek after him. For great were the signs which were wrought when the Lord rose again, and ascended up into heaven. Great also were the signs which were afterwards wrought through the disciples. Yea, he that wrought great signs by himself, wrought the very same also by them, according as he had said: Without me ye can do nothing. When that lame man (who was laid daily at the temple gate which was called Beautiful) stood up at the voice of Peter and walked on his feet, so that all the people were filled with wonder, then Peter bade them know that it was not by his own power that he had made him to walk, but by the power of him whom they had killed. It was in such wise that many were pricked in their heart, and said: What shall we do?

For they saw that they were burdened with the guilt of an exceeding great sin of impiety, in that they had killed him whom it was their duty to worship and adore. For such guilt they knew of no propitiation. Yea, their sin was indeed exceeding great, and the consideration of it made them to despair. But they needed not to despair, seeing that the Lord, when he hung upon the Cross, was pleased to pray for them, saying: Father, forgive them; for they know not what they do. At that hour he saw amongst the many that were aliens some that were his own. For such he asked forgiveness, albeit as yet he had received from them nought but insult. For he took no thought that he was dying by them, but only that he was dying for them.