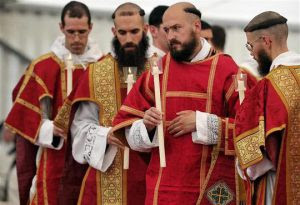 The news is confirmed. The superior general of the Fraternity Saint Pius X has just communicated to the Capuchins of Morgon his refusal to confer the priesthood on the two Capuchin deacons who were to be ordained in June.

Unfortunately, it is not the first time.

Already in 2012, Bishop Fellay had prohibited the ordination of the candidates of the Dominicans of Avrillé and of the sons of San Francisco. The reason: his attitude " not trusted " regarding the doctrinal preamble that should endorse the ralliement of the SSPX to conciliar Rome, a preamble that Bishop Fellay retired a few months later ...

The reason given for the refusal of 2018 is, once again, a problem of trust . Already in June 2016, the Capuchins had communicated their disagreement to the authorities of the Fraternity, which seek to conclude a purely canonical agreement with Rome. Such an agreement does not take into account the very grave doctrinal divergences, which force to consider the current Roman authorities as suspects of heresy.
Shortly before, in March 2016, Father Antoine, Guardian of the convent of Morgón, declared in a video made by MPI-TV, that he could not "celebrate and participate in this Jubilee of Mercy", as he celebrated, to the Once, a false mercy and the 50th anniversary of the Second Vatican Council. Such a statement had displeased Menzingen, who publicly encouraged this celebration.

What has also infuriated the Superiors of the Fraternity is an intolerable act of charity on the part of this mendicant order, which has dared to accept, rather to collect, simply to help at times; to some brothers who were in bad terms with their superior general, for not sharing Menzingen's "Accordist" line.

But the trigger was the support of the traditional friendly communities to the seven deans. Let's remember how they expressed their reservations, in May 2017, about the "marriage issue": it was not so much Rome that recognized our marriages but the SSPX, which placed all the marriages of the Tradition under the new canonical code, which is unacceptable in this matter. Once again, what was not taken into consideration was substantial: the true nature of the state of need engendered by the crisis of the Church. Hence the unanimous support of the friendly communities to the seven deans.

Some thought that the "electoral tour" of Bishop Fellay at the end of October of 2017 by all the friendly communities was a sign of pacification, or at least of a truce, awaiting the General Chapter of July 2018. Father Bouchacourt , who accompanied Monsignor Fellay on this visit, had clearly stated it. We can see that this is not the case, despite the allegations of the latter, which today requires strong decibels "loyalty, loyalty, loyalty, I want loyalty!

Rest assured that the lack of loyalty is not the fault of the Capuchins of Morgón, nor of the priests who do not share the recent Ménzingen options . To convince oneself, it is enough to return to what is true loyalty, so well described recently by General de Villiers ("Serve", prologue):


" True loyalty is to tell the truth to your boss, the real freedom is to be able to do it, regardless of the risks and consequences." Lyautey said: "When I hear the taco hits [the military, to manifest that they are going to fulfill an order , adopt the "firm" position by means of a heel hit. Note from NP] , I see that the spirits are closed. "True obedience mocks blind obedience, that obedience of friendship ... [...] Loyalty does not cut spirit or permanent assent to what may be useful to be seen well, silence sometimes comes close to cowardice, loyalty loses its legitimacy when legalism begins . "
Returning to our beloved capuchins, they, as always, will not complain.​
They will accept this new humiliation as a small participation to the Passion Our Lord, who is approaching. They will not fall into the gross trap that they were given: they will wait, instead of asking for the help of "another bishop", and thus, in Menzingen, they will not be able to say "they see it, we told them: they are the ones who broke with US".

Because the thread [of the trap. Note of NP] is a little thick, thicker than the cord worn by our dear religious; it is, in fact, so thick, that even the little Marcelino "Pan y Vino", would have seen it without problems ...
Christian LASSALE