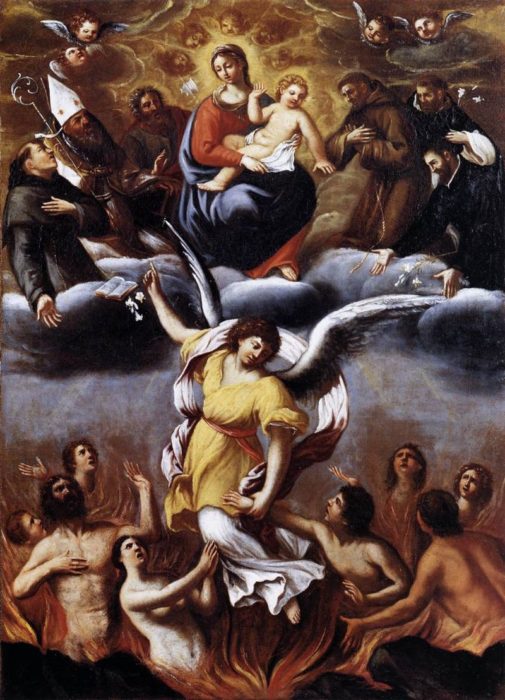 ​
Are Catholics right to pray for the dead, and to believe that such prayers can help to release souls from Purgatory? Michael F. Ross, in Christian Research Journal, claims that “Purgatory is an extrabiblical idea, imported into the church in the Middle Ages-a product of tradition but not Scripture.” Others, like W.Y. Evans-Wentz, have argued that the idea of Purgatory was pagan in origin, invented when “the Irish doctrine of the Otherworld in all its aspects, but especially as the underground world of the Sidhe or fairy-folk, was combined with the pagan Graeco-Roman doctrine of Hades.”

But praying for the dead, and a belief in temporary purgatorial fires is neither Medieval nor pagan in origin. In fact, there’s clear evidence for Jewish belief on this that goes back about as far as the Christian beliefs on the matter (both of which greatly predate the Middle Ages).

For example, many Christians are unaware that it’s standard Jewish practice to pray for the dead. The ancient “Mourner’s Kaddish” is an Aramaic prayer still prayed today, and is said on behalf of the dead. As the Jewish Virtual Library explains,


The Mourner’s Kaddish is recited for eleven months from the day of the death and also on the yahrzeit (anniversary of a death). A person may say Kaddish not only for parents, but also for a child, brother, or in-law. An adopted son should say it for adoptive parents who raised him.​
And we see such prayers for the dead in 2 Maccabees 12:39-45, a text which dates to before the time of Christ:

On the next day, as by that time it had become necessary, Judas and his men went to take up the bodies of the fallen and to bring them back to lie with their kinsmen in the sepulchres of their fathers. Then under the tunic of every one of the dead they found sacred tokens of the idols of Jam′nia, which the law forbids the Jews to wear. And it became clear to all that this was why these men had fallen. So they all blessed the ways of the Lord, the righteous Judge, who reveals the things that are hidden; and they turned to prayer, beseeching that the sin which had been committed might be wholly blotted out. And the noble Judas exhorted the people to keep themselves free from sin, for they had seen with their own eyes what had happened because of the sin of those who had fallen.

He also took up a collection, man by man, to the amount of two thousand drachmas of silver, and sent it to Jerusalem to provide for a sin offering. In doing this he acted very well and honorably, taking account of the resurrection.For if he were not expecting that those who had fallen would rise again, it would have been superfluous and foolish to pray for the dead. But if he was looking to the splendid reward that is laid up for those who fall asleep in godliness, it was a holy and pious thought. Therefore he made atonement for the dead, that they might be delivered from their sin.​
Whether or not you accept 2 Maccabees as Scripture, it clearly shows that these prayers were occurring for the dead for centuries, or even millennia, before the Middle Ages. It’s also significant since most Christians throughout history have accepted 2 Maccabees as inspired Scripture. There was no need to turn to Irish or Roman paganism to find these ideas: the ideas were already right there in our Bibles.

Significantly, this Jewish practice of praying for the dead is closely tied to the idea that it liberates the souls of the dead. The midrash Tanna Devei Eliyahu (תנא דבי אליהו) shows this clearly. The English translation reads:


Rabbi Yochanan ben Zakkai said: “One time I was going along the way and I came across a man who was gathering wood. I spoke to him, but he did not respond. Afterwards the man came to me and said, ‘Rabbi, I am dead, not alive.’

“I asked him, ‘If you are dead, what do you need this wood for?’

“He replied, ‘Rabbi, listen to what I am about to tell you. While I was alive my companion and I used to engage in sin in my mansion. When we came to this world we were sentenced to burning. While I gather word they burn my friend and while he gathers wood they burn me.’

“I inquired, how long is this sentence to last?’

“The dead man answered, ‘When I came to this world I left behind a pregnant wife. I know she is expecting a boy. I beg of you, keep an eye on him from the moment he is born until he is five years old. Then bring him to school, for the moment he responds, “Bless Hashem Who is blessed,” I will be released from judgment in Gehinnom.'”​
So this is a Jewish description of a soul suffering fires after death, but only temporarily, and who will be freed on account of his son’s prayers. And this tradition is ascribed to Rabbi Yochanan ben Zakkai (or Johanan ben Zakai), a first-century rabbi. The text itself is probably from the mid-third century, still a long time before the Middle Ages, and far removed from any Irish influence.

All of this is an important backdrop to the Christian debates about Purgatory and prayers for the dead. First, it shows that the Catholic doctrines are not the result of pagan accretions to Christianity during the Dark Ages, but a reflection of the Jewish roots of Christianity. And this should inform how we approach the Biblical evidence. For example, it’s a lot more plausible that 1 Corinthians 3:12-15 is a Purgatory reference if one is aware that there was a contemporaneous Jewish understanding of temporary purgatorial fires. And Jesus’ statement in Luke 12:59 (“I tell you, you will never get out till you have paid the very last copper”) makes sense in light of the Jewish belief in Gehenna as a location of temporary purgation. Even the strongest Protestant argument against praying for the dead (that there aren’t specific instructions to do so in the New Testament) is greatly weakened when we realize that the first-century believers were already praying for the dead.

Update: Special thanks to Eric Giunta for sending me this Jewish Encyclopedia article on Purgatory. It has several more examples demonstrating the Jewish beliefs on the matter:

The view of purgatory is still more clearly expressed in rabbinical passages, as in the teaching of the Shammaites: “In the last judgment day there shall be three classes of souls: the righteous shall at once be written down for the life everlasting; the wicked, for Gehenna; but those whose virtues and sins counterbalance one another shall go down to Gehenna and float up and down until they rise purified; for of them it is said: ‘I will bring the third part into the fire and refine them as silver is refined, and try them as gold is tried’ [Zech. xiii. 9.]; also, ‘He [the Lord] bringeth down to Sheol and bringeth up again'” (I Sam. ii. 6). The Hillelites seem to have had no purgatory; for they said: “He who is ‘plenteous in mercy’ [Ex. xxxiv. 6.] inclines the balance toward mercy, and consequently the intermediates do not descend into Gehenna” (Tosef., Sanh. xiii. 3; R. H. 16b; Bacher, “Ag. Tan.” i. 18). Still they also speak of an intermediate state.