Special thanks must go to the Sunshine Coast Safe Communities for organising this petition and to the LNP Member for Buderim, Steve Dickson, who has sponsored it. Unfortunately, it does appear that most of his LNP colleagues, as well as the Labor Party, remain as blind as ever to the threat we face.

Halal inquiry
Last Thursday, Kirralie Smith from Halal Choices and I both appeared as witnesses to the Senate inquiry into halal certification, along with a number of government departments such as the Australian Crime Commission and AUSTRAC.

Importantly, these organisations made it clear that they don't track the funds donated from halal certification authorities. Nor do they have any ability to monitor how funds sent overseas to places like Syria are used. In short, concerns about the funding of terrorism remain. Once the transcripts of the hearing are made public I will provide an additional update on these presentations, focusing on what the media has not reported.

This is part of my opening address to the inquiry:

"There are four main reasons that ordinary Australians are concerned about halal certification.

Firstly, halal certification is viewed as a form of religious tax that funds the growth and spread of Islam in Australia and that is ultimately funded primarily by the non-Muslim majority of the population.

Secondly, halal certification is seen as a way of imposing Sharia law and Islamic religious belief on the majority of non-Muslim Australians every time they sit down to eat.

Thirdly, halal certification causes concern because it results in the embedding of an Islamic religious ritual into the food production process of meat products. This necessarily results in discriminatory employment practices and raises additional concerns about a loss of religious freedom. Many Australians also have concerns that the Islamic slaughter process results in adverse animal welfare.

Fourthly, Australians feel like they are being taken for a ride. Halal certification is sold as a means of gaining access to export markets. But in the case of Australia’s staple meat product – chicken – 95% of it is consumed in Australia and most exports do not go to Islamic nations. Yet almost all chicken meat in Australia is sacrificed to Allah. Halal certified chicken is not exported but it is consumed locally by a population that is 98% non-Islamic."

Senator Dastyari stated numerous times during the hearing that he did not agree with me. In fact, he even indicated that it would not bother him if all food in Australia was halal certified. I've written about his 'so what' comments in relation to halal certification here.

However, I do not want to paint too gloomy a picture about this inquiry. A great deal of good has come from the efforts of Kirralie Smith and Senator Cory Bernardi and more Australians are now aware of this 'hidden' problem. Even Senator Dastyari realises that non-Muslim Australians still have some rights, including the right to religious freedom. So he does remain open to the idea of mandatory labelling. This might not solve the problem of halal certification in Australia altogether, but it would at least be an important first step that would provide all Australians with the information they need to avoid food that has been sacrificed to the Islamic god or that raises funds to build the next mosque in your suburb.

The other good news about this inquiry is that I do believe there has been a change in the tone of media reporting. It does appear, at least, that the media is prepared to give us a fairer run. This is important and it should be recognised. In particular, I would like to thank ABC radio in Brisbane for having the courage to run a complete interview with me. I doubt this would have occurred just three months ago.

Some links to media articles about the inquiry are below:

However, while the media might just be starting to turn the corner a little on the issue of Islam, it is still extremely biased and this is most obvious in relation to reporting that now depicts Malcolm Turnbull as Australia's greatest saint. According to the media, he can do no wrong. Ordinary Australians, however, hold different views.

And while it might be disappointing that the allegedly sane Liberal Party has elected a true-blue, dinky-die, cardboard cut out of Kevin Rudd as its leader, there is a silver lining. Malcolm Turnbull has been the best thing that's happened for the new Australian Liberty Alliance. It will be launched by the courageous Dutch politician, Geert Wilders, in October.

Interest in the party has soared since Abbott was ousted. If Australia ever needed a new party that was credible, well-managed and capable of standing up to the threat of Islam, it's now.

But this is the real endorsement of the Australian Liberty Alliance: 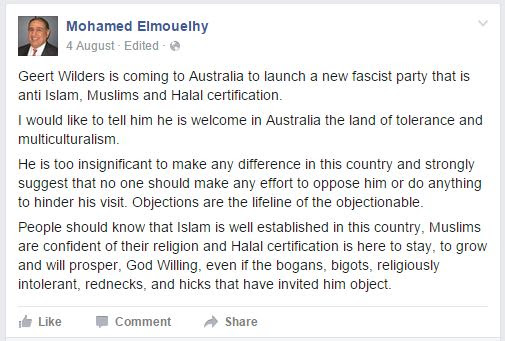