The Senate Economics References Committee has this afternoon asked me to appear as a witness for the inquiry into food certification. There is no doubt that this is due to the comprehensive report into halal certification that I lodged with the inquiry committee, as well as the fact that it was signed by many thousands of Australians.

As such, I would like to thank you for your support and encouragement. Without your willingness to demonstrate your concerns about halal certification, this report could have easily been ignored. However, the views of ordinary, decent Australians are now being heard because we are speaking up in huge numbers and we simply cannot be ignored any longer.

However, not everyone will be happy with this decision. This is what the head of the Halal Certification Authority wrote on Facebook recently: 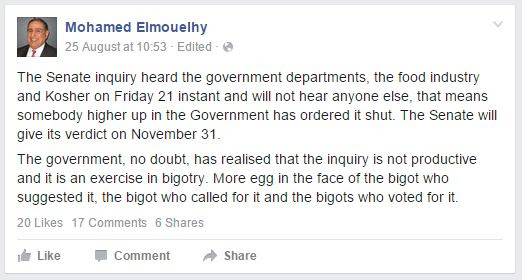 Tonight 4 Corners will focus on the issue of halal certification.

Kirralie Smith from Halal Choices will continue her important advocacy work for Australians who do not want to be forced to purchase products that are used to raise funds for Islamic programs here in Australia and overseas. Hopefully the ABC will give Kirralie a fair opportunity to put forward her case. She has been a tireless worker in this field and all Australians owe a great deal to her efforts. Without them, it is unlikely that the current inquiry would have been launched.

The episode will air at 8:30 pm tonight and will also be available on the ABC website afterwards.

Last Friday I appeared in the NSW Civil and Administrative Tribunal for yet another hearing into an ever-growing number of complaints lodged against me by the anti-free speech and homosexual activist, Gary Burns. This is now the 12th time that my legal team or I have had to appear before the Tribunal since September last year.

I now face what appears to be 31 complaints (although this number does not remain constant for long) and three separate matters in the Tribunal. In each matter, the Tribunal has the power to impose a fine of up to $100,000.

Last week we were given a second opportunity to argue that these complaints were vexatious, misconceived and that the Tribunal does not have the jurisdiction to hear complaints under New South Wales anti-discrimination law against residents of Queensland. The hearing was set down for a full day, but my esteemed complainer had to cut short his arguments about why his complaints were not vexatious. It just so happened that Gary Burns had to rush off to another hearing room where the Tribunal was dealing with yet another of his complaints. Fortunately for me, I was not the target of this one. Unfortunately for the residents of New South Wales, they are footing the bill for this 'justice' system that allows serial complainants to lodge an unlimited number of complaints for free, while they get to pocket any fines awarded.

Anyway, the good news is that our application was not rejected this time and the Tribunal has reserved judgement. It may be some months before any judgement is released, but I am hopeful that we will receive one that effectively puts an end to this farce and restores sanity. If that occurs, I will be proud to have helped protect Australians from busy-bodies and to curtail the operation of laws that are used to terrorise those who dare to utter opinions that the politically-correct cannot handle.

However, there is still much work to be done on this front. The NSW Anti-Discrimination Board is absolutely out of control and has now asked me to respond to allegations that I have 'victimised' Gary Burns. My supposed crime was to publish an article explaining how Burns bandied my family address about with Islamic organisations (which subsequently forced us to move). Apparently, the Anti-Discrimination Board sees no problem with my address being passed around by Burns, but it gets all hot under the collar if I happen to explain what its favourite customer is up to.

You really couldn't make this stuff up.

As I reported in my last email, judgement has been reserved in my case against the Chief of Defence Force. He terminated my commission as an officer in the Army Reserve for opposing uniformed involvement in political activity at the Sydney Mardi Gras and for merely suggesting that there is a link between Islam and the violent activities of the enemy we face in Iraq and Afghanistan.

I will let you know when the judgement is released.

Finally, I would like to thank you once again for your great support, generosity and prayers.

My legal fees have now reached more than $100,000 in the last 12 months. There is simply no way that I could have continued these battles without your support, or devoted my time and energy into tackling such issues as halal certification without the generosity and assistance of so many Australians.

I intend to continue these efforts because I am sure that we can win. We also have too much to lose if we don't stand up and fight hard.

However, I still have outstanding legal bills. The $10 donations have made a big difference over the past year. I would greatly appreciate any further support.

bernardgaynor.com.au
only operates due to your generosity.