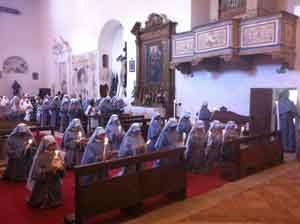 Franciscan Sisters of the Immaculate Subjected to Gender Ideologists

Edit: and yet here's an article at Life-Site which cites an Austrian Bishop, Laun of Salzburg, who cites Pope Francis as being opposed to the gender ideology.

(Rome) The Prefect of the Congregation of Religious, Cardinal João Braz de Aviz, appointed last May 19 has assigned Dorothean Sister Fernanda Barbiero as the Apostolic Visitator for the Franciscan Sisters of the Immaculate Conception (for visitation see Salus animarum suprema lex - Will he Smashing of the Franciscan Sisters of the Immaculate Conception Begin Now Too? ). The male branch of this religious community has been under provisional administration since July 2013. "Commissioner" Fernanda Barbiero comes from the same cultural milieu as Marinella Perroni, who teaches New Testament at the Benedictine College, Saint Anselm in Rome. Barbiero and Perroni are members of Coordinamento Theologe Italiane (Italian Coordination Centre Theologians, CTI). Perroni is even one of the founders and has led it for years as president. Barbiero and Perroni are "convinced feminists," as an article in the Journal of pastoral issues "Vita Pastorale" states. 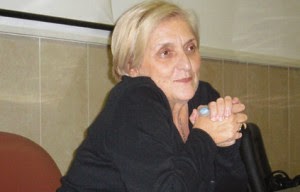 First pioneer of the "Christian Socialism," then the "Gender Theology"
In the article Perroni *(left) referred approvingly the struggle of Christians "for Christian Roots" only "as a rearguard action" and a "backward-looking strategy." Perroni is a staunch advocate of a "pluralistic world" and the "Conciliar Church". In the 70s the theologian dreamt of a new catechetical "faith-literacy course", which was developed as a literacy model in Brazil by Paulo Freire and his "Pedagogy of the Oppressed".

Who was Paulo Freire? The educationalist Freire referred to himself as a "Christian Socialist", who took the ideas of Marxist "liberation theology" as his own and created a syncretic form of Christianity and Gramsci-Marxism. That was the model on which to Marinella Perroni thought the new catechesis should be based. Perroni was ecumenically stamped by Taizé, in the 80's she was a pioneer of gender theory. She promoted gender as an "interpretive key for historical analysis." This brought her a tribute from the feminist online journal inGenere as "one of the most important representatives of the gender-theology '." 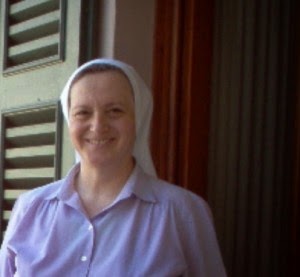 Sister Fernanda Barbiero, (left)**"Commissioner" of the Franciscan
Sisters of the Immaculate Conception​
It's about the same gender theory that after the Fourth World Conference on Women in 1995 experienced a politico-ideological triumph in Beijing, at the UN conference, where Sister Barbiero was hailed as "the big change". It is therefore no coincidence that Marinella Perroni showed little sympathy for Pope Benedict XVI.. .The German pope had, according to the theologian, been "guilty" of "intervening forcefully against the gender theory" and to have "called homosexuals as enemies of peace." Perroni was part of the governing body of the Women's Initiative SNOQ begun in 2011 that arose as a left protest movement against the then Italian Prime Minister Silvio Berlusconi, who was accused of "sexism". SNOQ defends the legal killing of unborn children as "women's rights". It was no problem for the
gender theologian Perroni. 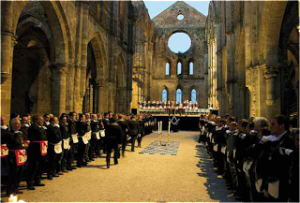 Masonic provocation: Symbiosis of Church and Lodge in the Character of "Human Rights"***

A few days ago Perroni appeared in the company of other great "prophets" of the Conciliar Church, with Alberto Melloni, the undisputed head of the "School of Bologna." Both were speakers at a meeting of the Masonic Grand Orient of Italy (GOI) about the "Secret Council" (see the report of the secret council - Second Vatican and Freemasonry ). Grandmaster Stefano Bisi went so far as to describe the character of the "encounter and dialogue," as a fusion of the Catholic Church and Freemasonry in the name of encouraging "human rights and freedoms".

Corrispondenza Romana writes: "It is the eternal temptation that always returns, this time in the form of an open provocation". Grandmaster Stefano Bisi said at the meeting: "I would be really glad to know what Pope Francis thinks of Freemasonry" and he invoked the same, by no means a random date, for which the Grand Master of the Grand Orient would want a papal signal, the anniversary of the 1870 breach in the Porta Pia which defeated the Roman city walls, representing the end of the Papal States and is commemorated by the Freemasons every year as a holiday. "The next September 20th is to be celebrated because of another breach, a breach that is being used to break down walls that separate the different worlds, who would like to meet. There is a great need for connections. That was also the message of the Second Vatican Council," said the Grand Master.

Grand Orient Makes Pope Francis and Conciliar Church Its Palace
"You can not accuse the Grand Master not to have spoken clearly," said Corrispondenza Romana . "The extreme clarity is in the message that's sent out with the meeting and published on the website of the Grand Orient." It says of the Second Vatican Council: This leap "forward of the Church into the modern society appeals to Freemasonry, today as then, which is renewed today, just as it did during those contentious years, following with interest the changes that are emerging across the Tiber [in the Vatican]. "Vatican II" presented a unique time of dialogue without a doubt and mutual understanding, which fall at this stage appears to have begun a new Conciliar era, where everybody has opportunities to link back to it." Grandmaster Bisi and the Grand Orient are pulling out all the stops to make Pope Francis and the "Church of Vatican II" its palace.

The responsibility for this lies with the Congregation of Religious that is handing on "pastoral custody" with the subtlety of an elephant in a china shop on its behalf and is definitely positioned on a particular side.


* Marinella Perroni, New Testament Scholar at Benedictine University of Saint Anselm in Rome, feminist, gender-theologian, and on the board of the abortion favorable Women's Initiative SNOQ
** Sister Fernanda Barbiero, "Commissioner" of the Franciscan Sisters of the Immaculate Conception, with Perroni CTI Member
*** Freemasons gathered in 2009 in the church ruins of San Galgano in central Italy