Feast of St. Peter's Chains
by Father Francis Xavier Weninger, 1876​
The Holy Church, today, celebrates a special feast in commemoration of the great benefit which God bestowed upon His people by miraculously delivering St. Peter, the visible head of the church, from prison. The entire event is described in the Acts of the Apostles, by St. Luke. Herod Agrippa, a son of Aristobulus, favored by the Roman Emperor Claudius, ruled over Judaea, with the title of king. To give more stability to his reign, he endeavored to make himself beloved by the Jews, for which there was no easier way than to persecute the Christians, especially those who fearlessly proclaimed the Gospel of Christ, as did the holy Apostles. He had, therefore, apprehended, and soon after beheaded, James the Great, brother of St. John, which bloody deed gave the Jews great satisfaction. To increase this, Herod commanded them to seize St. Peter, intending to make away with him in the same manner. His command was executed; Peter was taken prisoner, chained and locked in a narrow dungeon, which was guarded so vigilantly, that he could not escape. It was then near the Easter Festival, after which St. Peter was to be beheaded. The Christians, in deep distress, were praying day and night, that the Almighty would not permit His flock to be so soon deprived of its shepherd.

There was no human power to save him; but God, hearing the prayer of His people, delivered him by a miracle. On the eve of the day on which he was to be executed, God sent an Angel to set him free. Although heavily laden with chains, the holy Apostle slept peacefully, guarded by the soldiers. The Angel, who by his brightness, illumined the dungeon, struck him on the side and awakened him, saying: "Arise quickly. Gird thyself; put on thy sandals and cloak and follow me." The Apostle, whose chains had fallen from his hands, and who thought it all a dream, obeyed and followed the Angel. They passed the first and second watches without attracting their attention, and reached the iron gate which led into the street. The gate opened without the aid of human hands. After having conducted St. Peter through one street, the Angel vanished and was seen no more. Not until then did the holy Apostle realize that his deliverance was not a dream but a reality. Hence he began to praise the Almighty, exclaiming: "Now I know truly that the Lord has sent his Angel and delivered me out of the hands of Herod, and from all the expectation of the people of Judaea." He proceeded immediately to the house of Mary, the mother of John Mark, where the faithful were assembled in prayer.

When he knocked at the door, a servant, named Rhode, came, and asked who was there. Judging by the voice that it was Peter, she was so greatly startled with joy and astonishment, that, without opening the door, she ran back to announce the news. They all believed that she was insane, but as she reiterated her words, some said that it must be his guardian Angel. Meanwhile, the Saint repeated his knocking at the door. They opened it and perceived, with amazement, their beloved shepherd safe and free from chains. Their joy on beholding him was as great as had been their grief when he was taken prisoner. Having given the sign for silence, St. Peter related all that had happened to him. They all gave thanks to Divine Providence when he had ended, and learned to trust in future to the heavenly power and mercy.

Among the sermons of St. Chrysostom, there is one in which he asserts, that the chains by which St. Peter had been bound to the ground, came into the possession of the Christians soon after his deliverance, and were held by them in great honor. Eudoxia, wife of the emperor Theodosius the Younger, received them as a present from the patriarch Juvenal, when on a visit to the holy places, and sent one of them to the Church at Constantinople. The other she gave to her daughter Eudoxia, who married the Emperor Valentinian III. Eudoxia showed the chain to Pope Sixtus III., who, on his part, showed her the one with which St. Peter had been bound, before the Emperor Nero sentenced him to die. No sooner had the two chains been held together, than they suddenly united as if they had been but one chain and forged by the same hand. This miracle increased the veneration in which these chains were held, and actuated Eudoxia to build a special church at Rome for their keeping, where they can still be seen. Many sick were healed by their touch and many possessed were delivered; among the latter was a Count of the court of the Emperor Otho, who, in the year 969, was sent to Rome to be freed from the Evil Spirit. Pope John XIII. had hardly touched the count's neck with the holy chains, when he was relieved and his torments were ended.

St. Gregory the Great, writes that it was considered a great happiness to possess a few particles filed off from these chains, and that many persons devoutly wore them enclosed in golden crosses and lockets around their necks. Experience has shown that the touch of these crosses or lockets has restored health to many a sick person. A nobleman, who scoffed at this, and, in derision, dared to break one of these crosses, was severely chastised. He was instantly possessed by the Evil One and became so enraged that he took his own life, as St. Gregory relates. St. Augustine states that the iron of these precious chains is justly esteemed far above gold. Blessed are those fetters which touched the apostle and made him a martyr. "The touch of the blessed limbs of St. Peter has sanctified the instruments of torture." In another place the same Saint says: "If the shadow of St. Peter possessed a healing virtue, how much greater power must the chains of his sufferings have derived from him." Source 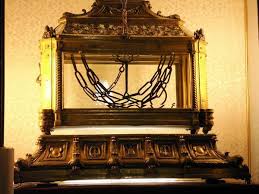 St. Peter's Chains​
St. Peter, the first pope, was imprisoned on 2 separate occasions during his 25 year reign as the Vicar of Christ. The pious Eudocia, wife of Emperor Teodosio II, journeyed to Jerusalem and found the chain that had bound Peter during his second imprisonment. According to the Acts of the Apostles (12:6), an angel caused the chains to fall from Peter's hands and led him past slumbering guards to freedom.

The chain was eventually given as a gift to Pope St. Leo the Great (440-461). In Rome there was already a chain that was greatly prized which had bound the saint during his nine month imprisonment in the Mamertine Prison near the Forum. When the pope compared the two chains, they miraculously fused together into one unbreakable series of links. Because of this miracle, Empress Eudocia built the Basilica of Saint Peter in Chains, and dedicated it to the apostle in the year 442. The relic is now kept in a golden urn beneath the high altar, close to the famous statue of Michelangelo's Moses.

A Homily by St. Augustine the Bishop

Peter was the only one of the Apostles who was worthy to hear the words: Verily, I say unto thee that thou art Peter, and upon this rock I will build my Church. Worthy indeed must he be, who, when the nations are to be built up into a Temple of God, is chosen as the ground-stone whereon the building is to stand: the pillar whereby it is to be held up, and the key wherethrough entrance is to be made into the kingdom. Concerning him the Word of God saith: That they brought forth the sick into the streets, and laid them on beds and counches, that at the least the shadow of Peter passing by might overshadow some of them. If the shadow of his body then could give help, how much more shall the fulness of his strength give help now? If the very air, as he passed by, was then profitable to such as besought him, how much more shall his favour profit where now he abideth? It is with reason that, throughout all the Churches of Christ, the iron chains wherewith he was afflicted are reckoned more precious than gold.

If his shadow as a visitor was so healthful, what is his chain now that he bindeth and looseth? If his empty image in the air had healing power, how much power must have been contracted from his body by those chains, whose iron weight sank into his holy limbs during his suffering? If, before he testified, he was so mighty to aid them that called upon him, how much mightier is he now since his victory? Blessed were the links, doomed to be changed from fetters and shackles, into a crown, which by touching the Apostle, made him a Martyr. Blessed were the chains, whose prisoner left them for the Cross of Christ, and which brought him thither, not as the instruments of condemnation, but of sanctification.