Cling to the Divine Essence in Prayer 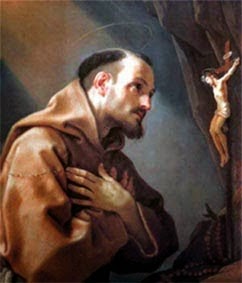 The supernatural principle will be preserved only by those
who cling to the divine essence in prayer...​
Today, a growing army of lost souls - the children of Belial - are feverishly preparing a world which will be ready and eager to accept the reign of Antichrist, a rule which will be thoroughly saturated with witchcraft and occultism, a demon-state where daily libations of human bodies and blood will be offered in satanic worship to placate the Man-God and his master Satan. Under the banner of a political and militarily organized atheism, this army of secular and occult humanists are uniting to deny the true God and His plan for humanity.

Only those who remain faithful to prayer will persevere to the end. This explains why so many who once professed the Christian faith have now abandoned the faith altogether or remain in the Church only in a bodily manner (see Lumen Gentium, No. 14).

Father Livio Fanzaga reminds us that, "Prayer is another fundamental weapon for the great battle of the end times. When man will glorify himself and proclaim the Antichrist as God made man, the supernatural principle will be preserved only by those who cling to the divine presence in prayer. These will 'experience' God, His existence, lordship, power and glory. In the time of Antichrist, the power of suggestion will cloud reason. Only those who intimately experience the supernatural in prayer will have the strength to acknowledge God's existence, despite the apparent evidence to the contrary...in an era marked by the seduction of the heart, of a general obscuring of the mind, and of the folly of reason, only those who have had a strong experience of God in prayer will preserve the faith. In that supernatural experience the faith will be conserved and you will conform to it. If you look to the sun and see the light, even if man denies the existence of the sun, what can you say? Having seen the sun you will not vacillate in the faith. You will be a rock in the waves of the sea." (Wrath of God: The Days of the Antichrist, pp. 149, 150).

Romano Guardini, in his classic work entitled The Lord, warns us that the Antichrist's arguments, "will be so impressive, supported by means of such tremendous power - violent and diplomatic, material and intellectual - that to reject them will result in almost insurmountable scandal, and everyone whose eyes are not opened by grace will be lost." (p. 513).

We pray because we love the Lord Jesus and desire to have an intimate relationship with Him. Our prayer is rooted in love. And this love will preserve us from the Man of Sin (even if we lose our bodies to martyrdom). This is the love that has made the martyrs, virgins, apostles and all the saints. St. Paul assures us that because of this love, "Neither death, nor life, nor angels...nor things present, nor things to come, nor might...nor any other creature shall be able to separate us from the love of God which is in Christ Jesus Our Lord." (Romans 8: 35).

In my last post, I quoted Marian Horvat, referring to Francis' Apostolic Constitution Vultum Dei Quaerere, which she correctly observes, "effectively asks all contemplative women to embrace the social agenda of the post-conciliar Popes, which eschews prayer for conversion to the Catholic Faith and the primary goal of contemplative life in the past: becoming victim souls to appease the just anger of Our Lord for the sins of individuals and nations...

A new signpost is erected: to offer “intercessory prayer for prisoners, migrants, refugees and victims of persecution.” These intercessory prayers must also extend to the unemployed, the poor, sick, drug addicts, AIDS victims and others in such “urgent” situations. That is to say, the contemplative sisters are to change their focus from prayer for conversion and salvation of souls to prayer for the social well-being and health of bodies. (n. 16)

Persevere in prayer and in fidelity to the Lord Jesus. Dark days are ahead. Soon, all will appear to be lost. For the Church, like her Master, must pass through Calvary. Soon, the Mass will be suppressed. Blood will flow in the streets. But afterward will come Resurrection. And then, finally, the world will burst into flower.

The Desire that Jesus Had to Suffer for Us
St. Alphonsus De Ligouri
Baptismo habeo baptizari; et quomodo coarctor, usquedum perficiatur?
"I have a baptism wherewith I am to be baptized; and how am I straitened until it be accomplished?" ---Luke, xii. 50.
I. 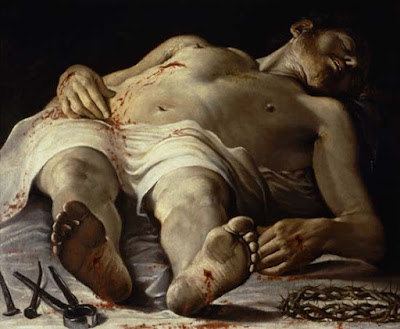 ​
Jesus could have saved us without suffering; but He chose rather to embrace a life of sorrow and contempt, deprived of every earthly consolation, and a death of bitterness and desolation, only to make us understand the love which He bore us, and the desire which He had that we should love Him. He passed His whole life in sighing for the hour of His death, which He desired to offer to God, to obtain for us eternal salvation. And it was this desire which made Him exclaim: I have a baptism wherewith I am to be baptized; and how am I straitened until it be accomplished? He desired to be baptized in His Own Blood, to wash out, not, indeed, His Own, but our sins. O infinite Love, how miserable is he who does not know Thee, and does not love Thee! 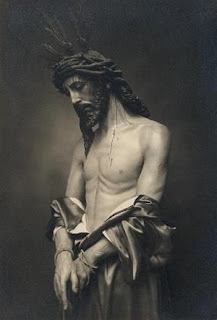 ​
Alas! my Jesus, I find myself also among the number of these ungrateful ones. Tell me, how couldst Thou suffer so much for me, knowing the injuries that I should commit against Thee? But since Thou hast borne with me, and even desirest my salvation, give me, I pray Thee, a great sorrow for my sins, a sorrow equal to my ingratitude. I hate and detest, above all things, my Lord, the displeasure which I have caused Thee. If, during my past life, I have despised Thy grace, now I value it above all the kingdoms of the earth. I love Thee with my whole soul, O God, worthy of infinite love, and I desire only to live in order to love Thee. Increase the flames of Thy love, and give me more and more love. Keep alive in my remembrance the love that Thou hast borne me, so that my heart may always burn with love for Thee, as Thy heart burns with love for me. O burning heart of Mary, inflame my poor heart with holy love.