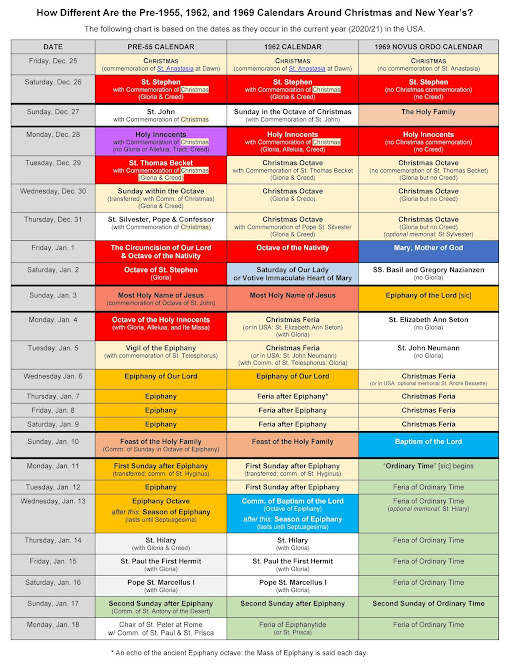 ​
More and more Catholics are waking up to the huge differences between the old and new Roman liturgical calendars—the one, a product of two millennia of organic development; the other, brainchild of a 1960s committee. A subcategory of these folks are waking up to the significant differences between the calendar of the pre-1955 Missale Romanum and the one observed with the 1962 Missale Romanum. The chart above compares all three for the period from December 25th to January 18th.

In the period from Christmas through Epiphany, one can see at a glance the variations in logic and emphasis. The old calendars place great emphasis on Christmas, which is commemorated throughout the Octave, with the daily use not only of the Gloria but also of the Creed; even more, they place massive emphasis on Epiphany, which is a feastday older than Christmas and of loftier pedigree—although one would never know that from how it was demoted in recent decades, shoved to a nearby Sunday for convenience, and shorn of its octave. In the old calendars, the Most Holy Name of Jesus (an 18th-century addition) is an obligatory Sunday celebration, but in the new, an optional weekday celebration for January 3, which is impeded in 2021.

In terms of the “psychology” of the season, one notes that the more modern feast of the Holy Family is not permitted to “intrude” until the great event of the Nativity in all its facets—including its cluster of special companion saints who, as it were, surround the cradle of the infant King—has been given plenty of room to shine. Our gaze is intently focused on the mystery of the Incarnate Word: Christmas for eight days, the Circumcision when the Redeemer first shed His blood, the Holy Name he was given and by which we are saved, the Epiphany or revelation of God as savior of the Gentiles. Only after this do we turn expressly to the family in which Our Lord grew up, His baptism in the Jordan, His first miracle at Cana (2nd Sunday after Epiphany), and the start of His preaching and miracles (subsequent Sundays).

It’s not that Our Lady and St. Joseph are neglected, for they are always present in the readings, prayers, and antiphons, especially those of January 1st. Besides, they have their own major feastdays elsewhere in the liturgical year. It’s a matter, rather, of allowing the central mystery of the Incarnation of the Eternal Son of the Father to “breathe” or occupy center stage. In the new calendar, on the other hand, there is a bureaucratic breathlessness by which we efficiently rush from one thing to the next, almost as if we’d like to get back to “Ordinary Time” as quickly as possible.

An attentive study of these three columns indicates just how the 1962 calendar is transitional to the new calendar of 1969. For example, the Sunday of the Octave of Christmas, instead of being transferred when it collides with one of the feasts of the great saints of the octave, supplants it; the beautiful contrast between the original day and the octave day of the Holy Innocents is lost (“useless repetition”); the once-universal proper celebrations of the beloved bishop St. Thomas Becket and of the pivotal Roman pontiff Silvester are stifled. More gravely, the feast of the Circumcision is no longer given that title, but simply called the Octave of Christmas; the Vigil of the Epiphany is gone; the full-scale octave of Epiphany is gone, although the ferias continue to use the Epiphany Mass in a vestigial or placeholding way, which made the later introduction of “Ordinary Time” that much easier.

Although the 1962 TLM calendar is far superior to the 1969 Novus Ordo calendar, the pre-1955 is superior to both. As with Holy Week, as with Pentecost, so too with Christmastide: this chart gives us yet another angle from which to see the importance of a principled return to the liturgical books prior to the hasty modernizations and clumsy simplifications of Pius XII and John XXIII. It is the next great step in the ongoing restoration of Catholic tradition.

Comment:
This chart is certainly a good example of the egregious changes which were made for the sake of transitioning into the new religion. The changes to the Breviary are even worse: removing 6 of 9 lessons from all Sundays in the year save Easter and Pentecost, as well as most semi-duplex feasts; the removal of the Athanasian Creed from the hour of Prime on all "Green" Sundays (praying it only on Trinity Sunday); the complete butchery of Tenebrae...

The removal of the Third Nocturn lessons was especially detrimental because the result is that most priests praying from the 1960 Breviary very rarely read from the Church Fathers. Surely this was intentional, as modernists despise the Fathers almost as much as they despise the Scholastics.