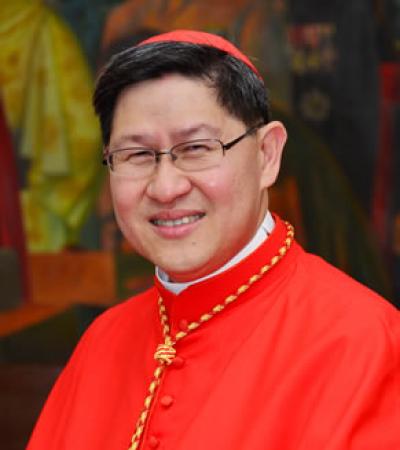 Cardinal Tagle: "The Church's approach to the LGBT world is present at the Youth Synod."

(Rome) Christopher Lamb, a member of the progressive British Tablet, reported on the press briefing held daily by the Vatican Press Office and Synod Secretariat during the synod. Today, Cardinal Luis Antonio Tagle, the Archbishop of Manila, took part in what has been described for some time in progressive circles as the successor to Pope Francis.

The cardinal is President of Caritas Internationalis and member of the communication commission of the synod. Lamb asked him if the Final Document of the Youth Synod included a reference to "LGBT Catholics." The homophile term "LGBT Catholics" is taken from the aberrosexual linguistic milieu. It is a paradox. It refers to Catholics who indulge in the grave sin of sodomy.

The response from Cardinal Tagle was published by Lamb in the early afternoon on Twitter:
When asked about #LGBT Catholics wants to be referred to in # Synod18 document Cardinal Tagle says 'my hunch is there' but could not say in what form.

Meanwhile, a video of the press conference is available, which is why the precise answer of Cardinal Tagle can be reproduced:

"I have the feeling and also the hope that these topics will be part of the final document of the Synod Fathers. Speaking in the assembly hall and in my English-speaking circulus - I do not want to call it a problem - the Church's approach to the LGBT world is present. "

In the run-up to the Synod, various sources, especially Archbishop Charles Chaput of Philadelphia, had criticized that the term "LGBT" of the aberrosexual milieu had been included in the preparatory document. Cardinal Tagle's response, speaking of LGBT and "LGBT world" himself, shows that it was not a slip-up. The preparatory document also required the consent of Pope Francis.

The "approach of the Church to the LGBT world" is in full swing and obviously wanted by the current Church leadership - and it is a path of flattery and pandering.

Critics spoke months ago that the real agenda of the Youth Synod was a recognition of homosexuality.