Bishop Fellay and the Grace of State

"Imperium Christi- the Empire of Christ; surely in the age in which man no longer serves Christ, it is more necessary than ever to return to the central fact that Christ is King, that His empire is over all men and all ages. The history of man, then must be judged in the light of his submission to or rebellion from the rights of Christ over man." Father Marshall M. Roberts

Below is an extract from Father Roberts excellent article:

[...]
The grave error of Bishop Fellay is to invent a grace of state that mimics that of the Pope, and to impose by fear upon the priests and faithful this false reality. But if the Pope's grace of office has not stopped him from making the gravest of errors in every part of the Faith, even more so is it no protection for Bishop Fellay who can claim nothing but at most the grace joined to the office of Superior of a Pious Union. This novel claim on his part is enough to warn the faithful of doctrinal aberration. He has invented an ecclesiology of the Society that is not true. Secondly, he has deviated from the truth on other matters. To mention but one, the claim that he knew nothing of Bishop Williamson's ideas concerning the number of Jews killed under Hitler is blatantly untrue. Bishop Williamson's views were open and notorious. There was the affair in Canada long before the Swedish television incident. Every priest with any connection with Bishop Williamson knew about his ideas. And yet, Bishop Fellay publicly denied knowing anything. He only knew Bishop Williamson was a bit "eccentric" and this was laid at the feet of his being British. This should have been a warning that there was a grave problem. Then there was the flagrant violation of canon law concerning Bishop Williamson being excluded from the General Chapter. The canon given as an excuse had no bearing upon the matter at all. The trustworthiness of Bishop Fellay can never be restored, barred a miracle. Yet this is not even the gravest thing. The Society has invented its own laws concerning the discipline of the sacraments, the supervision of groups such as the Benedictines, the Dominicans, and the Capuchins, a situation nowhere envisioned in canon law for the head of a Pious Union.

So we return to the question of the grace of state or of office enjoyed by Bishop Fellay. As a bishop without ordinary jurisdiction consecrated by Archbishop Lefebvre, he enjoys the same grace of the episcopal state. He exists because the Roman authorities are not trustworthy and are enemies of the Faith objectively speaking. They cannot be trusted, as he now cannot be trusted. As to the grace of office, at most he possesses a grace that is attendant upon his role as superior of a Pious Union. That is at the very most, and that is small indeed. His importance is only based on his fidelity to the Tradition of the Church in the present crisis, to follow the Catholic Church of always.

It is to be lamented that Bishop Fellay clings to the declaration that he sent to Rome so as to be approved, and that the blame is to be laid on the Roman authorities. Blame is to be laid everywhere byt at his own door. The General Chapter put out its six conditions for an agreement with Rome, reaffirming the betrayal. The Pope had refused Bishop Fellay's declaration before the General Chapter had taken place, and yet Bishop Fellay proceeds onward. Then, there is the declaration of the Three Bishops made for the twenty-fifth anniversary of the Society and in paragraph eleven we have the same door open to being approved by Rome. All dissent is followed by punishments, and this continues. Bishop Fellay, after all, has the grace of state. Indeed.

Yet if we are asked, why the great concern about an agreement that never took place? We can answer that this was not because of any reticence on Bishop Fellay's part, but only on Rome's. Nothing has changed but the invention of a grace of state greater even than the Pope's. And so those who disagree with Bishop Fellay are Schismatics, protestants, rebels- all the names thrown once upon a time upon Archbishop Lefebvre. In his case, at least the person he stood against was the Pope. Now it is given to those who have left the new Catholic Church built upon Bishop Fellay. I choose the one founded by Christ.[...] 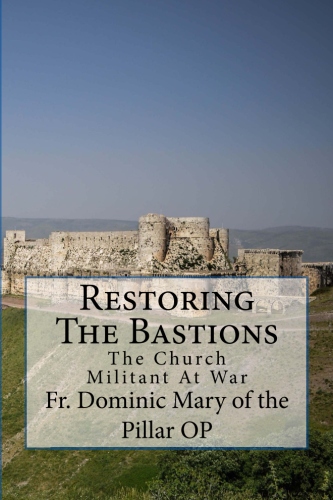