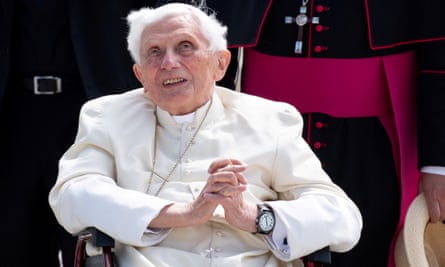 Benedict XVI pictured at Munich airport on 22 June before his return to Rome. Photograph: Reuters

Ex-pontiff, 93, has shingles after being in poor health for some time, says German newspaper ​

The former pope Benedict XVI, the first pontiff in 600 years to resign instead of ruling for life, is seriously ill, a German newspaper has reported.
The newspaper, Passauer Neue Presse, cited Benedict’s biographer, the German author Peter Seewald, who met the 93-year-old emeritus pope at the Vatican on Saturday.

A Vatican spokesperson said Benedict’s condition was “not particularly worrying”. The former pope’s personal secretary, the archbishop Georg Gänswein, did not immediately return a call asking for comment.

Seewald said Benedict, who has been in poor health for some time, was suffering from shingles, a viral infection that causes painful rashes and is common among older people.

Seewald said Benedict’s voice was barely audible – something other visitors have said for months – and that the former pope told him he might pick up writing again if he regains his strength.

In June, Benedict, who lives in a former convent in the Vatican gardens, left Italy for the first time since his resignation in 2013 for an emotional farewell visit to his older brother Georg in their native Bavaria.

Georg Ratzinger died on 1 July aged 96. The two brothers were ordained priests on the same day in 1951.

Benedict, who was elected in 2005 to succeed Pope John Paul II after a reign of nearly 27 years, shocked the world and even his closest aides on 11 February 2013 when he announced he was stepping down.

He told a gathering of cardinals that he was too old and frail to lead an institution with more than 1.3 billion members.

At the time of Benedict’s resignation the Vatican was mired in financial woes, sexual abuse scandals, and infighting among bureaucrats that led to leaks of important documents.

Benedict said his resignation was exclusively because of health reasons.

Hardline conservatives in the Catholic church who have been alarmed by Pope Francis’s progressive moves have looked to Benedict as their standard-bearer. This forced the former pope on several occasions to remind them there is only one pope – Francis.