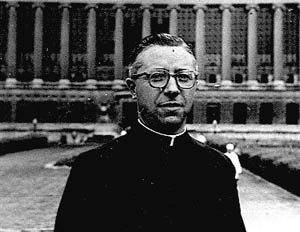 Arguably the most important figure in traditional Roman Catholicism for the past half century has gone to his eternal reward. Father Gommar Albert DePauw, J.C.D., died on May 6, 2005, after a life spent, especially in the tumultuous years during and after the wretched Second Vatican Council, in courageous and steadfast defense of the true Catholic and Apostolic Faith.

While the entire Catholic world mindlessly embraced the horrific changes called for by the Second Vatican Council and the later invalid, sacrilegious, and Protestantized "New Mass," Fr. DePauw stood with Christ. Yet he not only stayed loyal to his priestly vows, which included the solemn oath against Modernism, but also waged a largely one-man crusade to promote and maintain the Traditional Faith while he led a continuous barrage against the New Religion.

One of the most remarkable aspects of his counter-Conciliar campaign was that Fr. DePauw established the Catholic Traditionalist Movement before Vatican II had even ended! Before Archbishop Lefevre, SSPX, SSPV, CMRI, SSPV, Ecclesia Dei, and the Indult, it was Fr. Gommar DePauw who first saw that the flowery talk of a New Springtime for the Church was a ruse being deceptively used to befuddle the faithful while the revolutionaries enacted their Modernistic agenda.

In the aftermath of Vatican II, there was virtually nothing for traditional Catholics except Fr. DePauw's radio Masses and his Ave Maria Chapel. For those who lived through the early Conciliar period, it was a bleak time, yet, because of Fr. DePauw, countless souls were inspired to resist the New Order, and thus the groundwork was laid for the current Traditional Catholic Movement.

While more celebrated clerics of the post-war era, like Bishop Fulton J. Sheen, and Catholic "intellectuals," like William Buckley, eventually came to accept the reforms, Fr. DePauw instead obeyed, as St. Peter wisely taught, God first and sowed His seeds among those who sought the Truth. Nor did he grovel to the Novus Ordo apparatus to seek "permission" of bishops or send petitions to popes to grant an "indult" for what he and every Catholic priest has the Apostolic right and duty: to dispense the Sacraments for the salvation of souls and to offer the immemorial Mass for the glory of Almighty God.

Fr. DePauw used every possible medium available to promote the Faith not for his own aggrandizement, but for that of Christ, His Saints, and His Holy Church. Through the aforementioned Catholic Traditionalist Movement, numerous pamphlets, books, audio tapes, and videos were produced and distributed and later, with the advent of the internet, a CTM home page. Most remarkable was that this courageous priest financed the broadcast of the true Mass weekly on radio stations in a dozen major metropolitan areas nationwide at a time when it was not available to most Catholic in any medium.

All of this was undertaken at a tremendous personal cost to a man already rich with academic and patriotic accomplishments that, in normal times, would have most certainly been rewarded with further ecclesiastical advancement. By the time of the Council, Fr. DePauw had attained doctorates (licentiates) in Canon Law, Moral Theology, and Church History, along with a host of academic awards. He was then appointed to the Chair of Moral Theology and Canon Law and as Dean of Studies at the country's primatial seminary, Mount St. Mary's in Emmitsburg, Maryland.

Yet, under the Conciliar Church, such a position could be maintained only if the priest did not "make waves" and accepted the New Order. While most priests in similar and related positions at the time stayed within the "structure" and accepted the Modernist changes of the New Order, Fr. DePauw vehemently rejected such a course of action, as he wisely chose to follow the two thousand year teachings, doctrines, and practices of the Holy Roman Catholic Church.

To a non-Catholic, the voluntary renouncement of earthly happiness is seen as folly. However, for those who take Christ's advice of "carrying their cross" to attain eternal life, it is not: it is the purpose of life. Most of the saints welcomed such sufferings and saw them as opportunities to please their Savior. It was the expected thing to do. So it was with Fr. DePauw.

Prior to his glorious martyrdom, St. Paul assessed his own unsurpassed evangelical efforts as follows: "I have fought a good fight, I have finished my course, I have kept the faith" (2 Timothy 4:7/DRV). No finer words could be uttered in summarizing the life of one of Christ's most loyal modern disciples, Fr. Gommar Albert DePauw. Requiescat in pace.